Yeah, you try coming up with a synonym for “nail polish” that begins with “S.” Also, please note that this post contains way too many photos.

After an especially brutal winter, spring toyed with us for weeks and weeks before settling in. Throughout March and early April, we suffered through alternating two-day periods of “hmm, maybe I can put away my wool coat until next winter” and “LOL NOPE.” Last week the temperature dipped below freezing again, and some areas even got snow. So I’m a little reluctant to write a post with “spring” in the title; I don’t want to jinx what looks like the official, irreversible, no-really-this-time end of winter. But today’s perfect weather has me feeling optimistic, so let’s talk about corals and pastels and glitter topcoats. 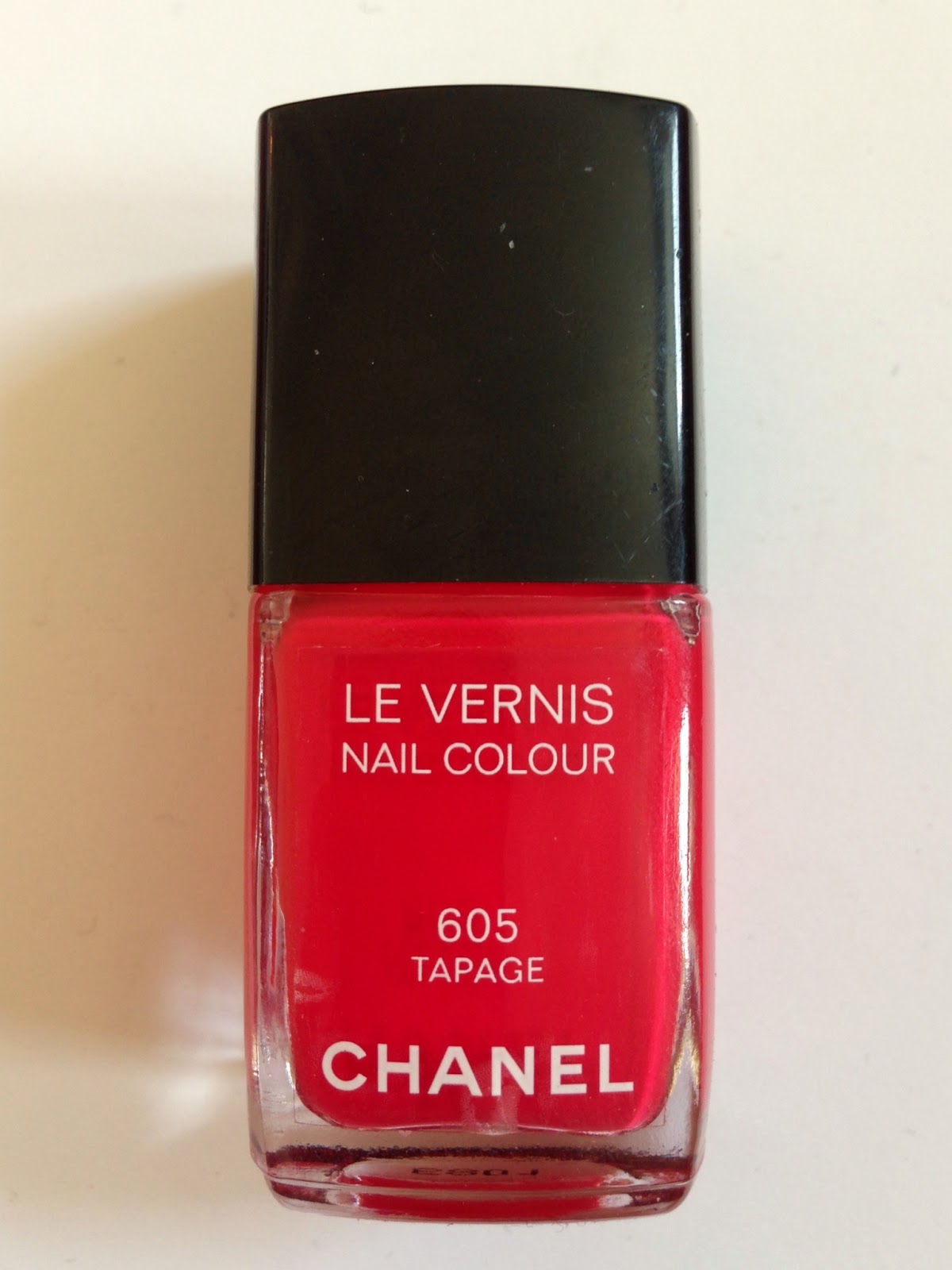 For a few months now, I’ve been enamored of a certain shade of coral that verges on true red but maintains a warm rosiness: basically, the coolest a coral can go while still deserving its name. We saw several examples of this shade in this spring’s makeup releases: YSL Rouge Volupté in Rose Asarine; Rouge Pablo, a nail polish from the same collection; and from Chanel, Chamade cream blush and Tapage nail polish.

Tapage, French for “noise,” was a gift from my lovely boyfriend; it’s my second Chanel polish after Rose Insolent, which I bought way back in 2010. Like Rose Insolent, Tapage applies perfectly and dries almost instantly; it’s mostly opaque in two coats, though I like to use three. That’s where its perfection ends, however. It chips so quickly. Sometimes it chips a few hours after I apply it, and yes, I always use a base and top coat. I guess I shouldn’t be surprised that Chanel nail polishes aren’t made to withstand vigorous dishwashing sessions, but for $27 I expected better.

It turns out that I own a near-dupe with a longer-wearing formula: Essie Come Here!, from the 2013 resort collection. Come Here! is a lighter, pinker coral than Tapage, but on the nails, especially in direct sunlight, it looks almost identical:

(Taken on a road trip through Alabama and Tennessee last June. Screw natural beauty, let me immortalize my nails!)
All that said, I’d still recommend Tapage, especially if you have a really trustworthy topcoat.

Resort Fling, a cantaloupe-orange jelly, is one of the four polishes in Essie’s Resort 2014 collection. It requires three coats for opacity and takes for-effing-ever to dry, but the edible-looking creamy orange color is worth it for me. Plus, I’m a grad student with no teaching duties this semester. I’m not going to pretend I don’t have the time.

Don’t you just want to bite into it? Gah. 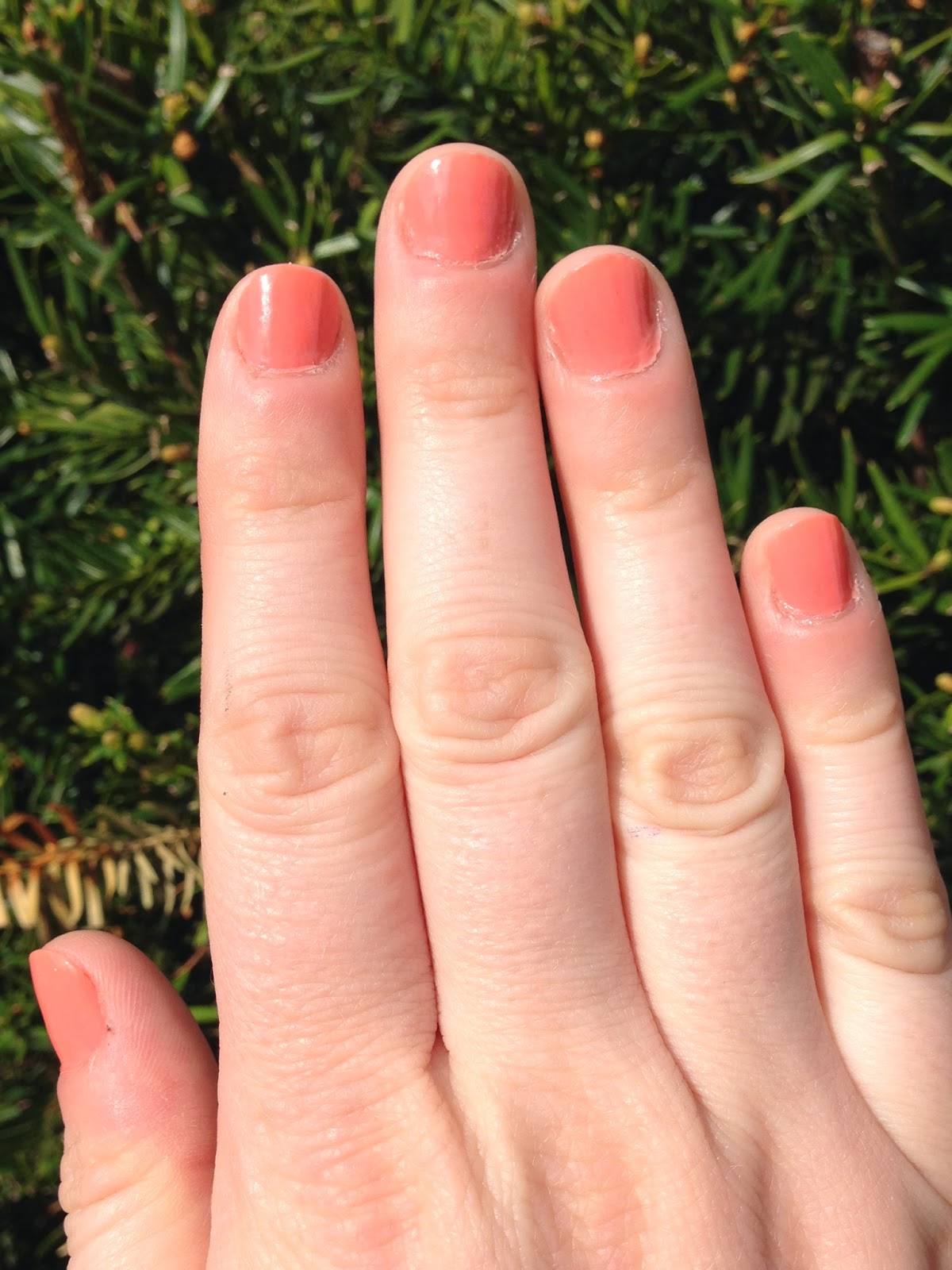 It’s easy for companies to get creative with glitter or shimmer polishes: just toss an unexpected color combination into a clear topcoat and, bam, revolutionary. It takes more skill, in my opinion, to come up with a truly unusual color for a creme polish. I think Milani has done it here. This is not what I’d call sea-green, but it’s a perfect spring green, the green of unfurling young leaves. 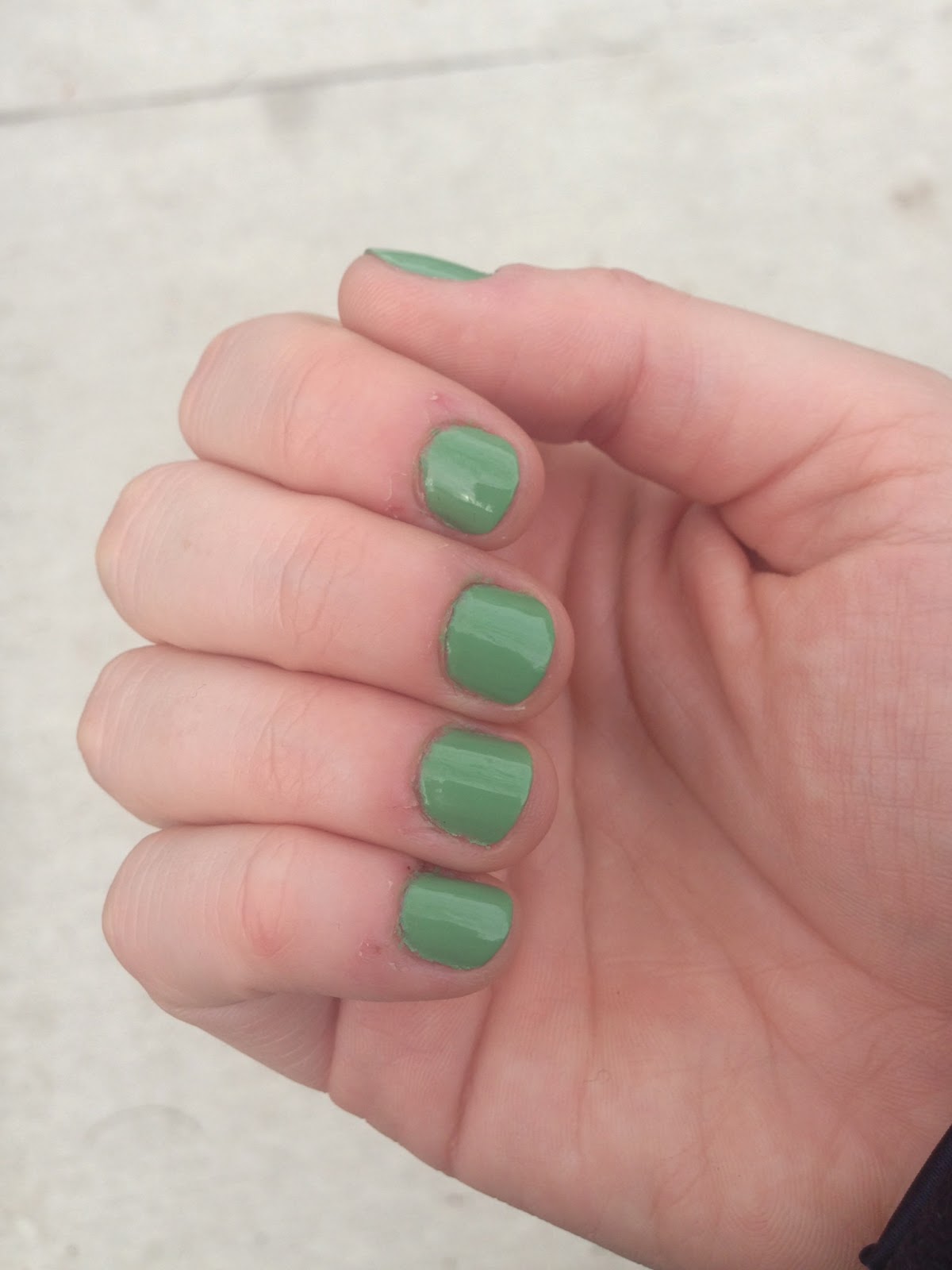 Like Come Here!, this polish hails from Essie’s Resort 2013 collection, but both are still available on the Essie website. In the Cab-ana is another example of a truly creative creme shade: a vibrant swimming-pool blue.

I love it for pedicures, but I did ballet for ten years and my feet are never going to appear on this blog; you’re welcome. Instead, you get an action photo from last summer, when I found the largest moth I’d ever seen and wanted to convey its truly terrifying scale. There have been a lot of invertebrates ’round these parts recently, haven’t there?

Here’s another, minus lepidopteran distractions:

This might be my favorite polish color of all time. I feel refreshed just looking at it.

This is one of the few polishes I’ve ever used up and replaced. (Well, I actually tossed my first bottle when it thickened, but same difference.) Play Date is the perfect spring purple: darker than pastel, but light and bright enough to read “I’m the Queen of the May” instead of “I’m a goth with WINTER IN MY HEART.”

The bottle of Play Date I had last year was fairly long-lasting, but this one seems like a new formulation. It applies as smoothly as Tapage, but it also chips as quickly. I may just have gotten a bad batch, though. And I enjoy painting my nails, so I don’t mind reapplying when necessary. Look at that color! The happiest purple I can imagine. 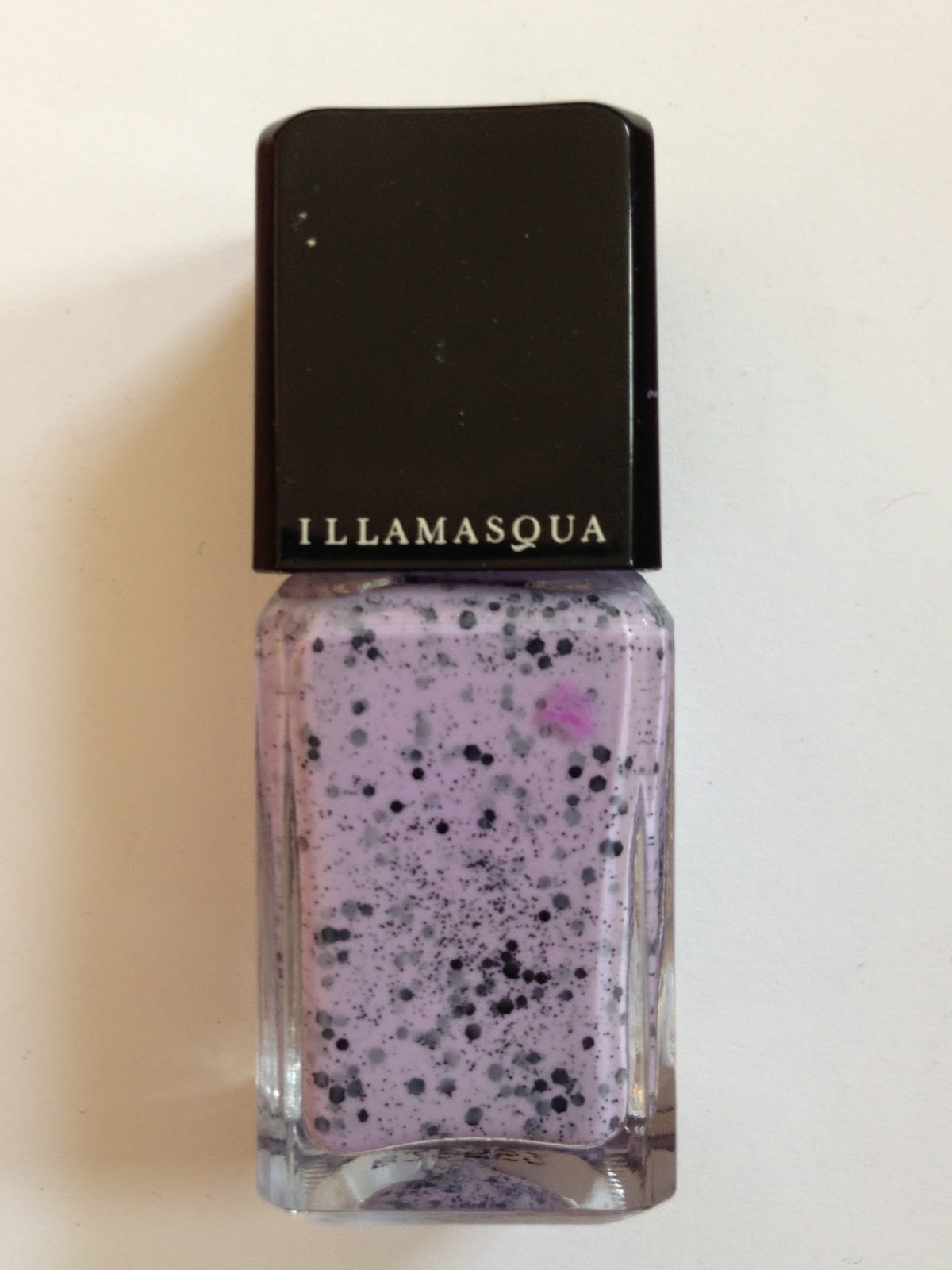 I assumed that Illamasqua’s pastel speckled polishes were limited edition for spring 2013, but the Illamasqua and Sephora websites still have the collection in stock; there’s also a blue, a mint, a dusty pink, and a tan, all crammed with black matte glitter. I hope they’ve been made permanent, because Speckle, at least, is a wonderful polish. It’s the only Illamasqua product I’ve ever tried, but I’m seriously impressed with the formula and lasting power. The black glitter is densely packed into a milky lavender base; three coats deliver a perfect speckled-egg look. This effect has since been imitated by other brands, such as Urban Outfitters, but I feel confident saying that the original trumps its knockoffs.

Fortunately for my bank account, I’ve never really gotten into indie nail polishes, the kind made by and for serious lacquer geeks and sold on Etsy or Llarowe. I have to cut off my obsession somewhere; if I allowed myself to investigate all the polish brands available, I’d be looking at swatches all day, and even I have other commitments. Also, indie brands tend to be all about the glitter bombs and linear holos and flashy duochromes. I appreciate their existence, but my loyalty lies with cremes. 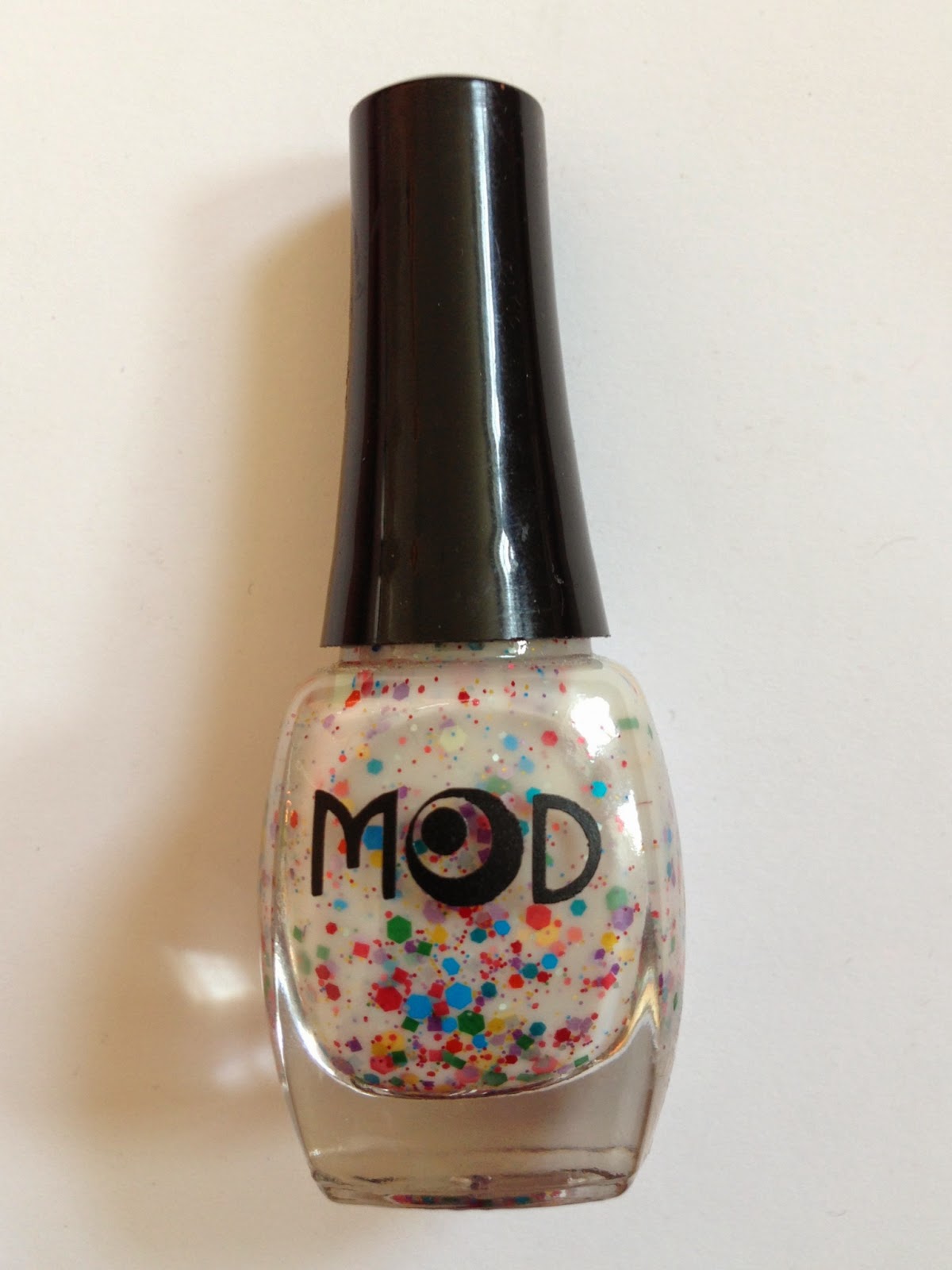 But we all make exceptions. I first heard about ModLacquer in an xoJane article that I haven’t been able to find again, despite diligent Googling. Maybe it never existed. Maybe the universe itself (speaking in the voice of xoJane? heaven forbid) told me to check out ModLacquer’s Etsy shop, where I promptly fell for Nonpareils. It’s a sheer white jelly with small and medium glitters in every color of the rainbow, perfect for a Pride event or Easter. But it’s relatively subtle for a glitter, too. Here, three coats of Nonpareils with nothing layered underneath:

And two coats of Nonpareils over two of Essie Marshmallow:

I was all set to complain about the formula, which is very sheer and too watery to suspend the larger glitter bits properly; the glitter sinks to the bottom, requiring a painstaking shake-fish-dab process. But ModLacquer has apparently reformulated Nonpareils since I bought it last summer, and now it “has more white so it’s less transparent than the previous formula.” I don’t know if this means it’s also thicker, but more opacity is definitely a step in the right direction. Incidentally, Nonpareils reminds me of China Glaze It’s a Trap-eze, reviewed here by Sleep and Water; the obvious difference is that the glitter in Nonpareils is a lot more sparse.

No, I did not just add two mini bottles to my cart while browsing the ModLacquer shop.

8. Essie Shine of the Times

Many glitter topcoats have a Christmas vibe, which makes them awkward to wear after the holidays. But Shine of the Times, though it was released in a Holiday 2012 collection, is a lovely topcoat for spring: an opalescent flakie polish that flashes peach and lime.

I recently layered it over Resort Fling, which made the peach flashes fade into the background, producing a delightfully understated lime shimmer:

And we’re done! Phew, that took forever. What nail polishes have you been enjoying this spring?

9 thoughts on “Seven Splendid Spring Shellacs (Plus a Topcoat)”