Notes: You may wonder why, given my devotion to seasonal makeup colors, I’m reviewing two of the most stubbornly summery lipsticks in my stash. Let’s just say that I’m even more obsessive about chronology than I am about seasonality, and these two hot pinks are next on my Lipstick Chronology list. Anyway, people in the Southern Hemisphere must get tired of the plum-bronze-oxblood palette that nearly every beauty blog embraces from September to December. So if you’re one of those people who walk upside down on the bottom of the globe, or if you just refuse to abandon eye-searing fuchsias after the autumnal equinox, this post is for you. 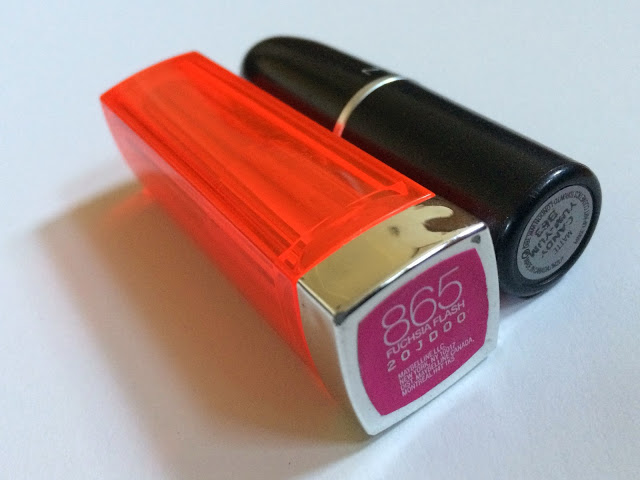 MAC’s Quite Cute collection, from spring 2011, holds a special place in my heart. You may remember it for its kawaii-themed names and white-based confectionery pastels. It was the first makeup collection in which I took a real interest, mostly because of its standout lipstick: Candy Yum-Yum, a fluorescent matte pink. We’d all seen fluorescent matte pinks before, but somehow this pink eclipsed every one of its forebears.

A wide-eyed novice in the world of makeup geekery, I didn’t understand that I couldn’t just order a limited-edition lipstick from the MAC website a whole entire week after the collection launched. So I missed out on Candy Yum-Yum the first time around. MAC resurrected it briefly in August 2012, but once again, I hesitated too long and missed my chance. I’d never had a chance to swatch the lipstick in person, and I felt wary about ordering such a loud color sight unseen. I also dislike buying limited-edition products, for fear that I’ll fall in love with them and think melancholy thoughts about the transience of earthly things every time I use them. So it wasn’t until the spring of 2013, when MAC made Candy Yum-Yum permanent, that I began to have serious thoughts about buying it.

But that was also the season when Maybelline released its Vivids line of brightly colored lipsticks. Of the eight Vivids, Fuchsia Flash may have caused the greatest online buzz, as many bloggers swore up and down that it was a perfect color match for Candy Yum-Yum. The Vivids were shiny instead of matte, but since I wasn’t as passionate about mattes as I am today, I figured that the finish couldn’t make that much difference. So at the end of a chilly March, in a CVS in Northampton, MA, I scored Fuchsia Flash for something like $5. (I had a coupon.) I have a great fondness for that particular CVS, since I went there so often in college for things like cranberry body wash and jars of peanut butter. My own school was a 35-minute bus ride away, in the middle of nowhere, and tiny, tranquil Northampton felt like a bustling metropolis by comparison. There was more than one coffee shop! There were thrift stores! But I digress.

I wore Fuchsia Flash a few times that spring and summer, but never felt enthusiastic about it. It looked sort of cheap, and I began thinking of it as my “’80s-hooker lipstick.” Fuchsia always has an element of screw-you tackiness, which is one of the reasons why it’s my favorite color, but there’s a difference between liking a color in the abstract and actually wearing it. If it goes on your face, it has to function in the context of your face, and Fuchsia Flash didn’t seem to do that. So, when I went home to San Francisco that summer, I finally tried on Candy Yum-Yum at a MAC store. I was surprised at how much I preferred it to Fuchsia Flash. The matte finish made a huge difference: the unnatural color now looked almost organic against my complexion. Reader, I bought it. And I was so enraptured with the new tube that I photographed it from multiple angles. Looking back, I don’t know why it took me so long to start a beauty blog. 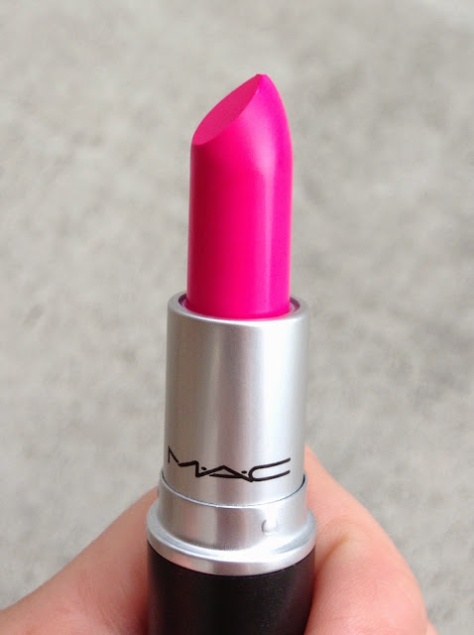 With that heartwarming tale out of the way, let’s get down to business. How similar, really, are Fuchsia Flash and Candy Yum-Yum?

Here are the tubes side by side: Fuchsia Flash on the left, Candy Yum-Yum on the right. 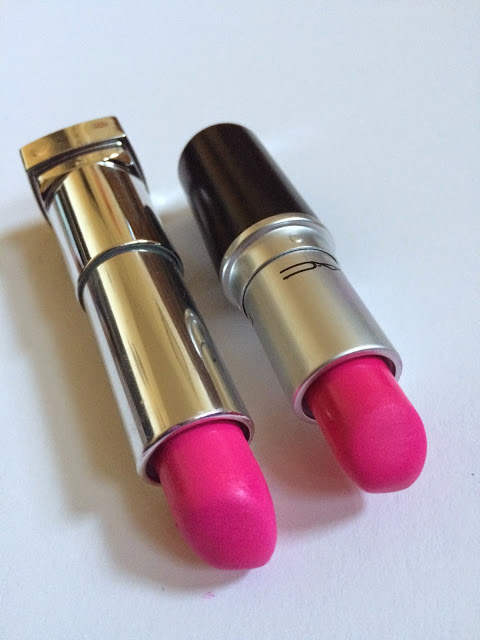 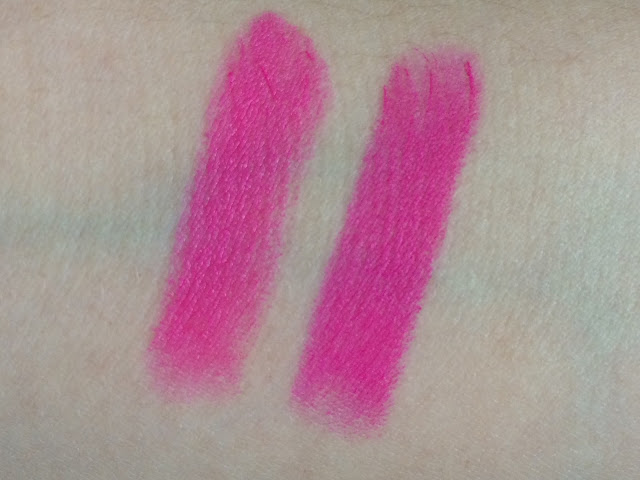 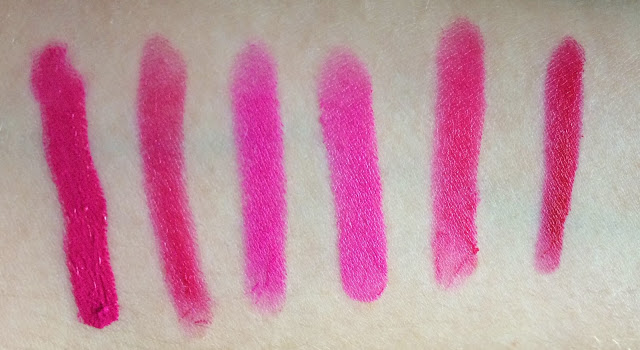 Tilted toward the light in order to show textural differences. See how much more matte CYY is than FF? 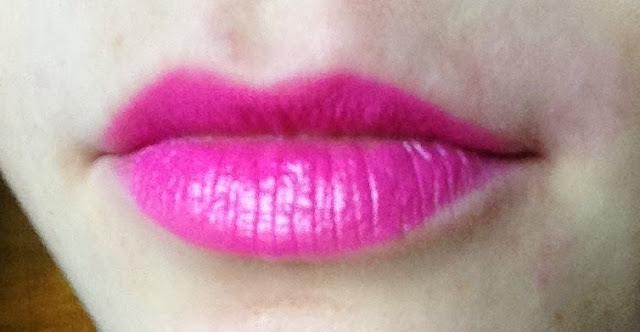 As I’ve mentioned before, the Maybelline Vivids are my favorite drugstore lipstick formula: hydrating and relatively long-lasting, with a jelly-like yet opaque finish. I worried that Candy Yum-Yum might dry out my lips, but the MAC matte formula is comfortable, and it doesn’t look completely atrocious on lips as dry as mine were when I took these photos. (The shine of Fuchsia Flash, by contrast, seems to highlight the dry bits.) Both lipsticks leave a stain when they fade, but Candy Yum-Yum stains more deeply.

And a couple of full-face photos: Fuchsia Flash on the left, Candy Yum-Yum on the right. I don’t think either lipstick is transcendently flattering on me, but I do prefer Candy Yum-Yum. It makes my lips look like rose petals instead of freshly licked lollipops.

Finally, as promised, a word about dupes. Well, many words.

When I first got into makeup, I noticed that whenever I typed the name of a product into Google, “[product] dupe” would pop up as a suggested search. It took me a while to figure out what this meant, but once I did, I found that there was something addictive about dupe-hunting. There are many reasons why we look for makeup dupes: because certain brands aren’t available to us, or we prefer to patronize cruelty-free brands, or we just don’t want to pay $50 for a Tom Ford lipstick. But the pursuit of dupes can become a pastime in itself, not a means to an end. I bought a supposed dupe of Candy Yum-Yum and felt smug for a few days, but my desire for the real thing hadn’t been quelled, and I ended up splurging on the MAC anyway. Instead of just spending $16 in the first place, I dropped an extra $5 on a lipstick that I stopped wearing after I bought Candy Yum-Yum. And that, I think, is the problem with dupes. If you want the real thing and it’s accessible to you, buying a dupe just won’t feel satisfying.

Yes, you say, but MAC is a mid-range brand. What about that $50 Tom Ford lipstick? Isn’t it worth looking for a dupe for that? Sure–but only if you’re absolutely certain you’re not the kind of person who can spend $50 on a lipstick. We all have our psychological cutoff points that may not tally with our actual purchasing power. My mother, for instance, has never spent more than $10 on a lipstick. The thought of doing so is laughable to her. But she also doesn’t spend time Googling makeup dupes. If you do, you’re probably a beauty junkie, in which case it may already be too late for you. You’ll buy that Wet n Wild dupe of Tom Ford Cherry Lush, feel dissatisfied, move on to a Maybelline dupe, still feel dissatisfied…Do you see where this is going? You’ll either amass five lackluster dupes and decide that one of them is good enough (even though it really isn’t), or you’ll buy the Tom Ford anyway and feel silly for all those drugstore indulgences.

Here’s the thing: Designer makeup isn’t made for women who have a whole wardrobe of designer clothes. It’s made primarily for women who can’t buy designer clothes but want a piece of the brand anyway. I’m a broke grad student who can’t afford a Chanel suit, but if I eat peanut-butter sandwiches for lunch for a few days, I can afford a Chanel lipstick. If I want that lipstick, there’s no reason why I shouldn’t save up for it instead of seeking solace in a series of cheaper imitations. My Candy Yum-Yum experience has taught me a cardinal rule of makeup addiction: never buy a beauty product unless you want it for itself and not as a substitute for another product. (Unless your dream product is truly inaccessible, geographically or financially or otherwise.) My favorite drugstore cosmetics are the ones I bought because I thought they were special, not because I thought they were similar to more expensive products.

This is getting a bit preachy, so I’ll stop. What are your thoughts on dupes?