No, really, I’ll always have this blush. It’s so pigmented that I can’t imagine hitting pan earlier than 2018.

I bought Paris two months ago, during Anthropologie’s Thanksgiving sale, but have worn it only a few times since then. It’s a bright watermelon pink, perfect for the warm months, but prone to clashing with my usual plum-taupe-rose-scarlet winter color scheme. I’d wanted a Face Stockholm cream blush ever since Drivel about Frivol posted her glowing reviews of six of the shades, but it took me a long time to settle on just one. I go through blushes very slowly and didn’t want a color similar to one I already had, so after much hemming and hawing I opted for Paris. My collection was missing a warm pink blush, and looking at dozens of portraits of Restoration beauties for this post made me wonder why I’d waited so long to seek out that dissipated claret-and-adultery flush.

The Face Stockholm blushes come in deceptively small packages. I couldn’t help thinking “Wait, that’s it?” as I lifted the tiny, lightweight silver pan from the box. Here it is in my hand, to give you an idea of its size (granted, my hands are not the smallest):

The pan contains 4 grams, or .14 oz, of blush. By contrast, a NARS blush weighs 4.8 g (.18 oz), and a Sleek blush is a formidable 8 g (1.7 oz). But I was surprised to discover that my beloved Illamasqua cream blush in Zygomatic is exactly the same size as my Face blush. The Illamasqua pan is shallower and wider and there’s that unnecessary squashed-square packaging around the pan. So wasteful, really.

I admire Face for keeping their blush packaging sleek and portable and environmentally friendly, and for providing a little mirror in the lid. Classy.

Nor was I shortchanged when it came to color. One dab in the pan taught me that I’d be hard-pressed to use up four grams of this particular blush. Paris is the most pigmented blush I own; NARS Coeur Battant comes close, but it’s a powder, which means slightly softer application. Paris is like the OCC Lip Tar of blushes: almost impossible to under-apply, at least for someone as pale as I am. Touching my fingertip lightly to the pan gives me more than enough color for one cheek. To avoid sweeping on too much at once and becoming one of those blush ladies (you know the kind), I find that I need to build up the color in very thin layers. I also have to wait some time between one layer and the next, since the act of blending the pigment into the skin makes my cheeks very pink, and it’s hard to tell where nature stops and art begins until my flush has subsided. Here’s Paris built up on my arm, then the same amount blended out; as you can see, it looks cooler and softer on my skin than it does in the pan. 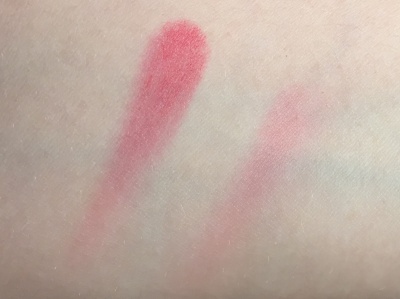 I can see this color working well with all manner of warm-toned lipsticks (peach, orange, coral-red), as well as with aggressively cool ones like lavender. Paris has a clarity that makes it a good match for other bright, clear colors. I might even try it with Maybelline Lilac Flush one of these days. Below, I’ve swatched Paris with similar colors in my collection. Left to right: Revlon Moisture Stain in Barcelona Nights, Paris, Urban Decay Revolution Lipstick in Streak, and Milani Butter Gloss in Peach Cobbler.

The color of Paris also reminds me of the pink pigment that maiko (Kyoto dialect for “apprentice geisha”) use to tint their eyes, brows, and cheeks. The more junior a maiko is, the more pink she’ll incorporate into her makeup for that innocent flush.

Here’s a recent photo of Shouko, a second-year maiko, at a New Year’s event at Kyoto’s Ebisu Shrine, where she was handing out lucky bamboo to the public. Since Shouko is still a junior maiko, she has blended the pink pigment across her cheekbones and up to her temples and forehead. She’s wearing a white collar, which means she’ll soon become a senior maiko and start wearing less pink on her face, as well as simpler kanzashi (hair ornaments) and kimonos with more subdued patterns. I really do need to write up that post on geisha, don’t I…

The formula of Paris is very, very light, and it feels even lighter because I need so little to achieve a decent flush. It’s more or less like patting pure color on my cheeks. I think this photo gives a good idea of the thin crelly texture:

Kate praised the performance of these blushes on her lips, but I didn’t have the same luck. Paris gave my lips a pretty coral tint, but its peculiar textureless texture did nothing to soothe or conceal their winter dryness. I might try it again when my lips are in better form. Here’s a photo of Paris on my lips and cheeks, taken two months ago. Eyeshadow is NARS Lhasa because, I mean, why wouldn’t it be.

Here I switched out Paris on my lips for Revlon Barcelona Nights:

Finally, from yesterday, a toned-down version of the Restoration look I tried a few months ago. NYX Jumbo Pencil in Yogurt and CoverGirl LashBlast Length on my eyes; three thin layers of Paris on my cheeks, applied closer than usual to the apples; Revlon Lip Butter in Candy Apple on my lips.

I almost never wear orange, but it was so relentlessly white outside–one of those days when the ground blends into the sky and the horizon line disappears–and I put on an obnoxiously bright shirt for the sake of contrast. This snow family could do with some blush, don’t you think? Or just some eyes.