Welcome to another installment of my not-actually-monthly compilation of monthly favorites! Some bloggers use favorites posts to spotlight new purchases, but I prefer to feature older favorites as well as non-makeup discoveries. Let’s begin with my main makeup fixation in June:

Purple has been my favorite lip color since I started wearing lipstick regularly, and its entrance into the mainstream in the last few years has given me an overabundance of options. I currently own six purple lipsticks, and five of them saw a good amount of wear last month (odd one out: the cyborgian NYX Castle). The second half of June was unusually overcast and cool, and purple lipstick always seems as appropriate for cloudy summer days as coral lipstick does for sunny ones. 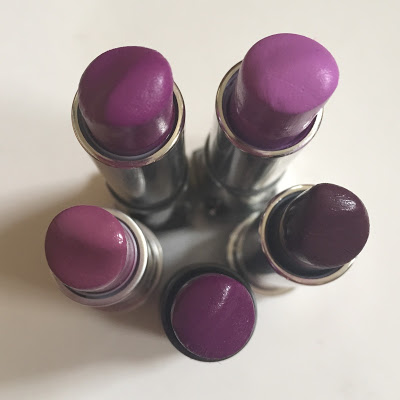 One of my favorite things about purple lipstick is that it’s not tied to a specific season. Sure, people tend to wear lighter purples in the warm months and darker ones in fall and winter, but purple is still an “odd” lip color, which means that it always looks slightly inappropriate no matter the season. So I was bemused at a recent xoVain article entitled “Do This Don’t: Purple Lipstick in the Summer.” The opening paragraph claims:

“Traditionally, the beauty world reserves all vampy lips—including purples and crimsons and cabernets—for the fall. But you know what? To heck with traditions. This summer, I’m all about experimenting with color and texture and new looks, and so far, that’s included incorporating more purple—yes, purple—into my lipstick rotation.”

Wait a second. Since when are all purple lipsticks “vampy,” and since when is purple lip color for summer a “don’t”? My sense is that people either approve or disapprove of purple lipstick as a category, not as a seasonal color. If you think purple lipstick is a “don’t” for summer, you probably think it’s a “don’t” for the rest of the year as well—and you’re in the minority, at least where the beauty industry is concerned. Purple lipstick has been a staple of summer makeup collections over the past few years. MAC alone has released multiple summer purples, including Goddess of the Sea (Alluring Aquatic), Pure Heroine (MAC x Lorde), and Bust Out (Surf Baby). Clinique’s recent Pop Lip Colour launch included Grape Pop, a “neutral, blue-purple creme.” The Bite Lip Lab limited release for this May was Lavender Thistle, a gray-toned purple. Look, I get it: “Do This Don’t” is a more compelling headline than “Do This Thing That Everyone Is Already Doing.” But, well, everyone is already doing it. Including me.

And can I just mention how much I dislike beauty articles that fabricate a rule or tradition and then boast about breaking it? (xoVain is not the only culprit here: I’ve lost count of the number of websites that have published some version of “Evidence that Orange Lipstick Really Does Look Good” four years after the revival of orange lips.) Setting a straw man on fire is not a revolutionary feminist act. But it seems par for the course over at Vain, a website I’ve followed since its inception and given more chances than it deserves. The community of commenters on the site is a delight, but I need to stop visiting in the vain, if you will, expectation of great beauty writing. Old Internet habits die hard—as does my habit of digressing from the point in my blog posts.

Ah, yes: purple lipstick. The weather was one of the reasons I wore a lot of it in June, but there was another reason:

I’ve been noticing hydrangeas more than ever this summer. Living in the suburbs means that I get to enjoy the fruits of other people’s gardening labor everywhere I look: 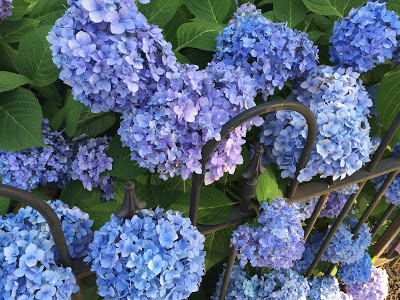 Depending on the pH balance of the soil, hydrangeas can be blue, purple, pink, or a glorious combination of all three. 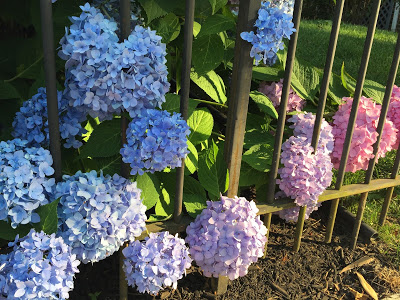 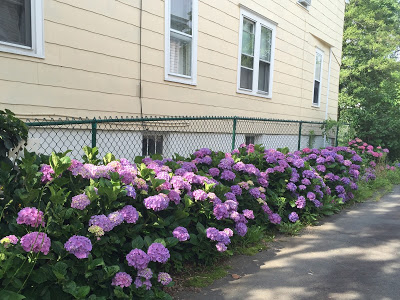 Tell me that walking by that house every morning wouldn’t inspire you to wear purple lipstick.

Maybe it’s just an exceptionally good year for hydrangeas, but there’s another reason I’ve been noticing them. I’ve been following the world of Kyoto geisha for a long time now, so I know that maiko, or apprentice geisha, change their decorative hairpieces (kanzashi) every month to reflect the foliage and festivals of the season. In June, maiko usually wear willow (yanagi) or hydrangea (ajisai) kanzashi. In previous years, willow kanzashi dominated and hydrangea were an interesting exception. This year the tables have turned, with dozens of maiko sporting hydrangea kanzashi in every shade of blue, purple, pink, and white.

Kanzashi reflect not only the natural beauty of the season, but also the age and rank of the wearer. Mamesumi (豆純) made her debut just last December. As a first-year maiko, she paints only her bottom lip and wears a brightly colored hydrangea kanzashi with dangling petals, or shidare. The round green pin on the right side of her head indicates that she’s still under 18.

Mamefuji (まめ藤), the most popular maiko in Kyoto, recently became a senior maiko. She wears a kanzashi in a subtler colorway, with a tiny snail on the leaf.

Katsuhina (佳つ雛), my favorite maiko, reached senior status last year. Her kanzashi features purple and white hydrangeas with small silver accents. When she becomes more senior, she’ll trade the floral “crown” part of the kanzashi for a plain colored band, but keep the puff of flowers over her left ear.

The kanji for “ajisai” is 紫陽花. This is an example of the Japanese language assigning kanji to a native Japanese word based on the meanings, not the usual sounds, of the kanji. 紫 means “purple,” 陽 means “sun,” and 花 means “flower.” In the word 紫陽花, the character 花 is read as “sai.” But the standard readings of 花 are “hana” (when the character stands alone) and “ka” (when it’s incorporated into a larger word). So far as I know, 花 is pronounced “sai” only in ajisai. The same is true for the other two characters: 紫 is usually read as “murasaki” or “shi,” not “a,” and 陽 is usually read as “hi” or “yo,” not “ji.”

Of course, ajisai can also be written in hiragana (あじさい).

Before this summer, I’d tried at least half a dozen times over the course of a decade to take up running. There was my senior year of high school, my first year of college, the summer after my senior year of college, and a handful of times in grad school, but all of those attempts petered out after a few days. The same problems arose every time I ran: I was slow, my endurance was shit, and literally anything could shake my focus. I was also trapped in a neurotic catch-22: I didn’t want to spend money on proper running gear until I’d proven to myself that I could establish a habit of running, but my lack of proper running gear prevented me from establishing that habit. I was using my boyfriend’s old running shoes, which were two sizes too large. I didn’t own a sports bra, despite my 32F chest (the F stands for FML). I can’t believe I went running at all under those conditions.

This year, something changed. I was doing a 90-minute yoga class every week and going to the gym semi-regularly, but I got it into my head that I couldn’t consider myself physically fit until I conquered the form of exercise that gave me the most trouble. Over the course of a few months, I acquired a pair of obnoxiously bright coral Nikes (a gift from my mom, actually), a Maia sports bra (“the high-support bra for the well-endowed athlete,” hahaha kill me), and a stupid-looking holster that held my iPhone to my arm so I could listen to a carefully curated mix of uptempo k-pop songs during my workout.

Then, in mid-June, I resolved to run every day for a week. I ended up running only five days that week, but I was astonished at my improvement. Yes, there were days when the sun beat down relentlessly and every nerve in my body screamed NOPE NOPE NOPE and I gave up and went home after five blocks. Yes, I had repeated flashbacks to a sixth-grade P.E. exam in which, as the last in my class of thirty to finish running a mile, I had to ignore the taunts of a few asshole boys standing on the sidelines while I struggled along. But after that first week, my endurance had tripled (tripled from practically nothing, but still). Now, about three weeks later, I can run for twelve minutes without stopping to rest. That might not sound like much, and don’t ask me how much ground I actually manage to cover in those twelve minutes, but it’s more than I’ve ever been able to do before.

If anyone reading this has more running experience than I do (which wouldn’t be hard), please tell me: Does running ever become, you know, fun? Right now it’s endurable, but can I trust it to be enjoyable eventually?

And, last but not least…

Or, at least, the five justices who voted to strike down the federal ban against same-sex marriage, making it legal in all 50 states.