I’m back, bitches! I have to submit a few more job and postdoc applications later this month, but most were due either Oct. 15 or Nov. 1, so I’ll be able to resume a regular blogging schedule in the weeks to come. I can’t properly articulate how good it feels to be done! (Well, sort of done. In academia, almost nothing is ever truly done.) It’s just as well that I’m returning to my blog, since my list of products to review has been getting longer and longer—this is actually the seventh draft post I’ve started to write in the last three weeks. I’ve resolved not to buy any more beauty products until I’ve finished reviewing everything I’ve accumulated in the last month or two, and I’ve accumulated quite a lot. But all that in good time.

By a stroke of great fortune, my birthday, on Nov. 2, coincided with my university’s fall break, my boyfriend’s fall break, and my completion of applications. We took the train into New York and spent my birthday doing almost exactly what we’d done for my previous two birthdays. We started in the West Village, where I paid a pre-lunch visit to the NARS boutique on 413 Bleecker Street. I actually hadn’t done that on my birthday before (or ever, I think), but I was eager to check out the 413 BLKR collection and the lethal-looking Steven Klein lip-pencil coffrets: 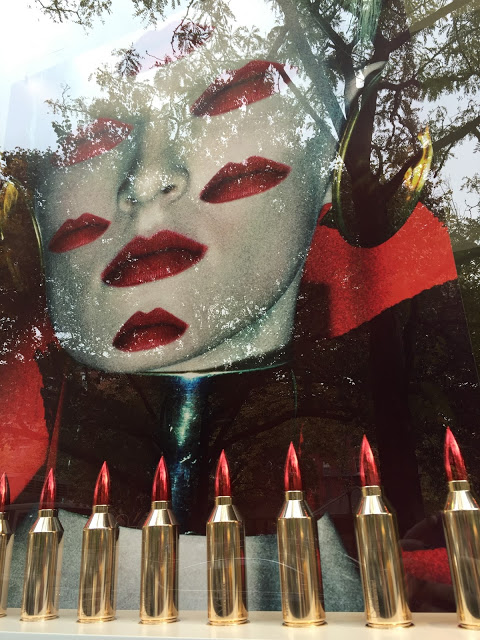 Look at those things. They’re huge and heavy in person; I can imagine a Jacobean revenge heroine using one to murder her perfidious lover. The SA tried to convince me that the coffrets were a deal at “only” $75 for the container and three lip pencils (Dragon Girl, 413 BLKR, and Sex Machine). Technically this is true—the NARS lip pencils are a ridiculous $26 each, so you’re getting the coffret for free, plus $1 off each pencil—but I mean, come on. You don’t buy the coffret if you want a deal; you buy it if you want a bondagey makeup-related objet for your mantel.

The rest of the holiday collection looked good: I was especially taken with the lip gloss in Provoke, a nearly opaque bright purple, and the Killer Shine lipstick in No Shame, a plush berry-toned fuchsia. But the products I really wanted to check out were the 413 BLKR lipsticks, available only online and at freestanding NARS stores. The regular semi-matte lipstick is a deep reddish brown (or brownish red?); there’s also a Pure Matte lipstick in a warm medium brown. The Pure Matte looked too orangey for my complexion, but the semi-matte came home with me: 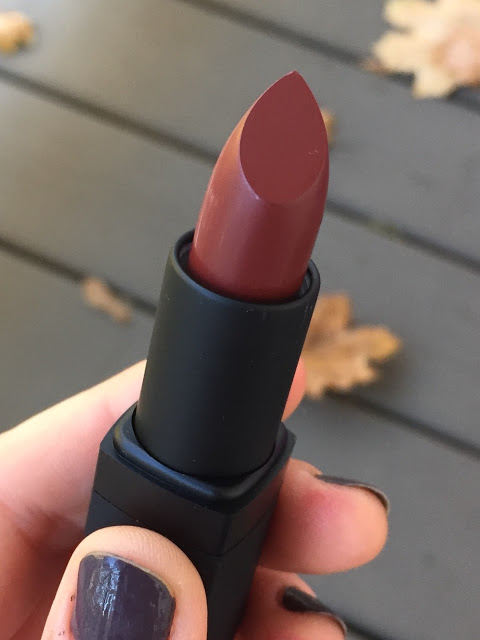 We also stopped into The Meadow, a foppish store that sells only bitters, chocolate, and salt—and, of course, only the most rarefied versions of all three. I’m afraid I dropped $10 on a bar of white chocolate embedded with Lucky Charms. Shelf upon shelf of single-origin 80%-cacao bars with subtle undertones of cherry, honey, and earth, and I went straight for this: 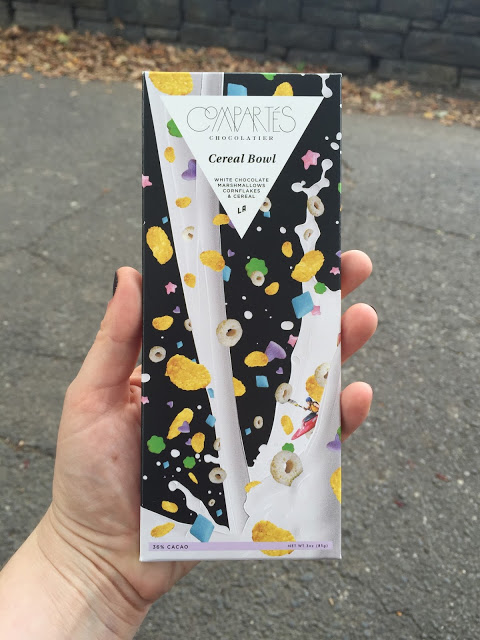 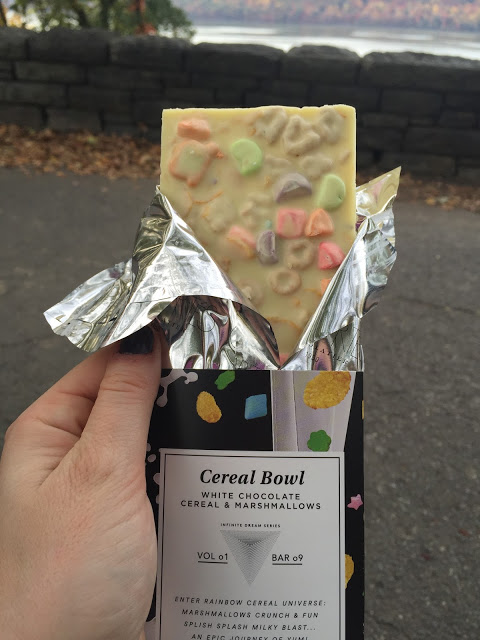 After a light Mediterranean lunch (“light” compared to what we’d eat later), we took the A train uptown to the Cloisters for the third year in a row. In case you’re unfamiliar with the Cloisters, it’s a museum of medieval art in Fort Tryon Park, in the northwest corner of Manhattan. Unlike most museums, it’s not just a modern building that houses much older objects; instead, the building itself was cobbled together in the 1930s from medieval European ruins (as well as some modern materials, of course). Fort Tryon Park overlooks the Hudson and, on the other side of the water, Fort Lee, NJ. Just a few miles to the south of Fort Lee is Weehawken, where Aaron Burr killed Alexander Hamilton in a duel in 1804.

I’ve grown attached to this tradition: early November is a beautiful time to visit the park, and I like spending my birthday in a museum devoted to a much longer view of history. 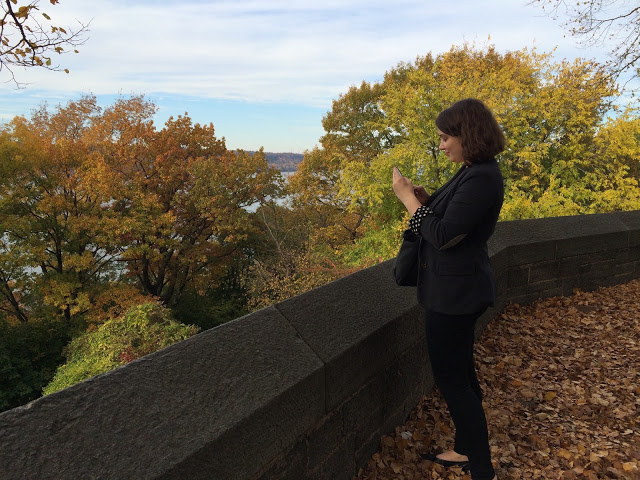 Yes, I have atrocious posture, especially for someone who did ballet for a decade.

And when even the furniture makes faces at you: 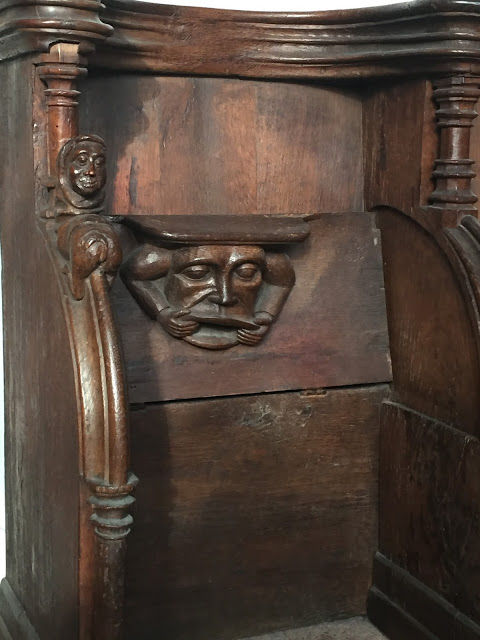 One of these days I’ll put together a stained-glass-inspired makeup look. I especially love the combination of goldenrod and muted purple:

After a couple of hours spent wandering the park and museum, we headed back downtown. The Upper West Side Sephora was just about equidistant from the Cloisters and our hotel: how convenient, and how utterly unforeseen by me. I popped in to buy my first brown eyeliner (!), Urban Decay Demolition, and to collect the Sephora birthday gift, a box containing two mini NARS lip pencils. I’d read on r/makeupaddiction that some Sephora locations had run out of the gift, but this store hadn’t, and I was reminded anew that people prone to worrying should stay away from Reddit. Adorable bb versions of Cruella and Rikugien are now mine! 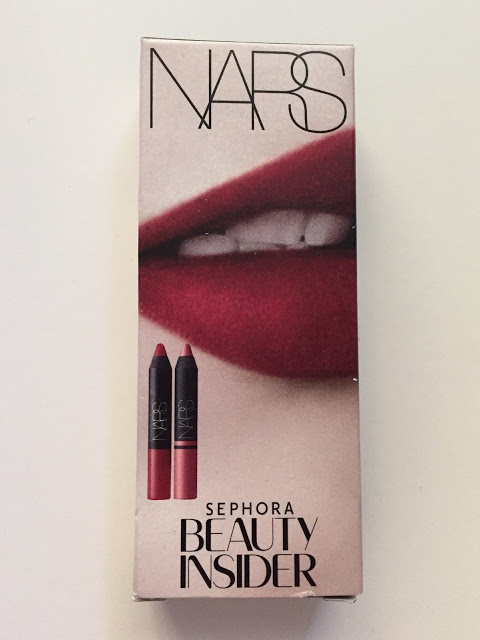 It’s nearly impossible for an amateur armed only with an iPhone to take appetizing photos of food, but I’m still going to post a photo of our first round of cocktails at dell’anima. Mine was a “chamo-mule”: a Moscow mule with fresh ginger beer and chamomile-infused vodka. dell’anima’s cocktail list used to be exclusively Italian and austere, but in the last year or two it’s made a couple of concessions for philistines like yours truly. 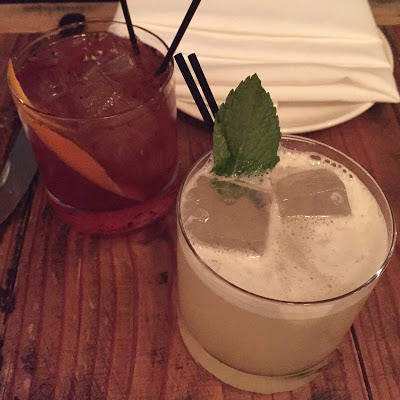 Bread pudding must be the least photogenic of desserts, even (or especially?) when it comes with vanilla-bourbon gelato, apple compote, molasses creme anglaise, and candied pecans:

After a postprandial stroll, we returned to the hotel and fell asleep to the dulcet tones of jackhammers just outside our window on the West Side Highway.

The next day, I got a haircut at my usual place in Brooklyn (I don’t think they hire anyone who has less than one full sleeve of tattoos). Having my hair curled into soft waves made me reflect on how damnably lazy I am with styling: I never do more than smush some styling gel into my hair and let it air-dry. Maybe I should get a curling iron or something? I took several awkwardly lit selfies, of which this, alas, was the best one. I promise the mild duckface was accidental.

For lunch, we went to Roberta’s in Bushwick, where the beer comes in mason jars: 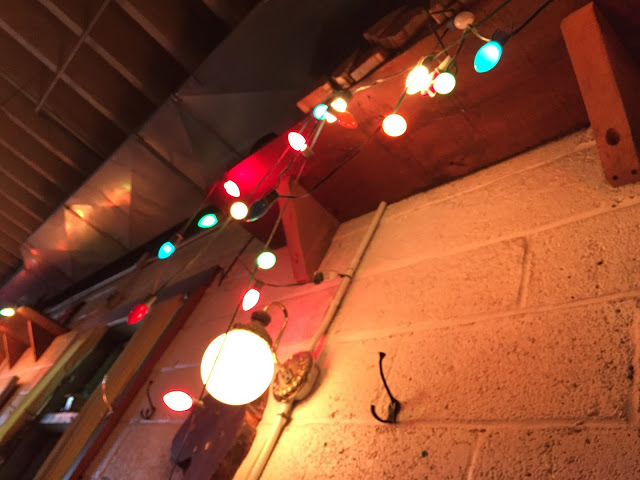 The restaurant was surrounded by several barren-looking blocks of warehouses, punctuated with the odd raw-chocolate boutique or outpost of Beacon’s Closet. The sun beat down on a huge advertisement for Bulleit Bourbon. There were skinny young men in vintage blouses and leather jackets. We were simply not trust-fund-shabby enough to read the semiotics of the scene. In my first year of grad school, I knew a guy who collected vintage synthesizers and told me that he was “just not cut out for a career.” Not an academic career; a career. Bushwick was like that. So we got back on the subway…

…and returned, eventually, to the suburbs. And because this is a beauty blog, after all, here’s my entire NYC haul. The nail polish is Altitude Attitude, from Essie’s new holiday collection. 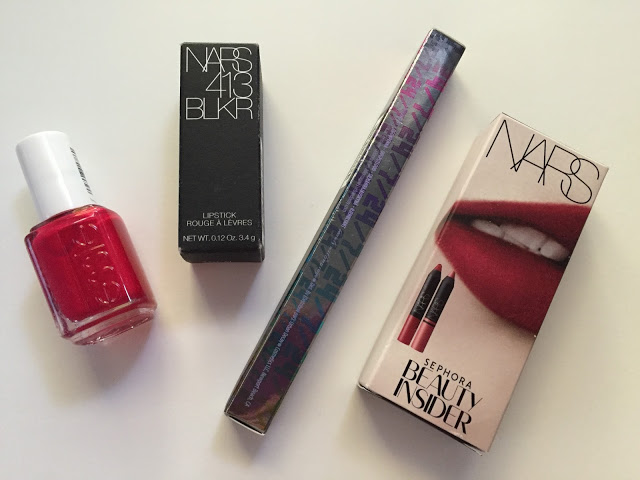 Reviews to come! I can’t guarantee that I’ll be posting more than once or twice a week, since I still have to dissertate and teach and all that, but I’ll be around more often from now on. I’ve missed you.

10 thoughts on “Birthday Frolics, the Cloisters, and NYC Beauty Shopping”