I had such a bad experience with Milani’s liquid matte lipstick last year that I…ordered another liquid matte lipstick earlier this month. Luckily, the universe sometimes rewards our lapses of logic, and I’m pleased to report that ColourPop’s Ultra Matte Lip in Trap surpassed my expectations by a little and Milani’s version by a lot.

The Ultra Matte Lip collection debuted last June (Temptalia has swatches of the original twenty-five shades in one convenient collage). The lipsticks sold out almost immediately, and ColourPop took a few weeks to restock, which only intensified the buzz and demand. But some deep-rooted perversity in my psyche ensures that the more hype a new product receives, the less likely I’ll be to buy it—well, to buy it right away, at least. I’m not immune to hype, but I like to wait for the gushing praise to die down and the negative reviews to emerge before I make a purchase. Though I was immediately drawn to Trap, I didn’t mind waiting several months for the Internet to reach a consensus.

During this time, ColourPop released several new shades, but the Internet reached no consensus whatsoever. I read that the Ultra Matte Lip formula was the most comfortable on the market; that it was the most painfully drying on the market; that its flawless finish lasted for hours; that it started to flake and crumble almost immediately; that the lipsticks had been reformulated since their initial release, and were now far less drying than before; that some shades were more comfortable than others; that all of the shades had always been and would always be absolute shit. How could a liquid lipstick be so divisive? I had to know the truth, and $6 seemed like a reasonable price to pay for it. So when I made a ColourPop order three weeks ago, Trap found its way into my basket. (And then I waited an entire week for my order to ship.)

The packaging is sturdier than I expected: a thick plastic tube with a doefoot applicator attached to a screw-on metallic cap. I like the heft and sleekness of the tubes, though experience has taught me that ColourPop’s cute holographic lettering wears off PDQ. The cap seems secure enough, but I’ve flown enough to know that this is just the kind of tube that will open up on an airplane, and I’ve heard of Ultra Mattes coming unscrewed in people’s purses or when stored lying down instead of upright. I’ve carried Trap in my makeup bag a couple of times with no ill effect, but I wouldn’t, like, fill a new Hermès with a dozen of these tubes. Luckily, my bag of choice is a beaten-to-hell canvas tote from the Strand Bookstore.

The applicator is small and slanted; the angled part hugs the lips and gives a lot of control over where the lipstick ends up. By contrast, the Milani doefoot has no slant at all.

The doefoot picks up a lot of product, as you can see from the swatch below (one dip in the tube, one swipe across my arm). I like to wipe the applicator on the rim of the tube before applying it to my lips. ColourPop describes Trap as “greige,” but once swatched, the beige disappears and Trap becomes a cloudy grayish lavender:

Below, my feeble attempt at finding dupes in my collection. L-R: Milani Matte Naked, Topshop Motel, Trap, Topshop Boardroom, MAC Up the Amp. Boardroom is the closest to Trap color-wise, but it’s sheerer and less saturated.

I’ve worn Trap on two different days now, and have had roughly the same experience both times. I find that I need to apply balm first and let it sink in for several minutes before using the lipstick (a good policy to follow with most liquid mattes). When I first tried Trap, I was stunned at how lightweight and smooth the formula felt on my lips, and how little product I needed for full coverage. Despite its light color, Trap is extremely pigmented. Unlike Milani Crush, which dried to matte almost immediately, Trap takes a minute or two to dry down; this allows me to fiddle with the placement and make sure one side of my mouth doesn’t look much larger than the other. I’d advise doing your best Cletus the Slack-Jawed Yokel during the dry-down period, so as not to smear the product while it’s still wet. Trap has a fairly thin and watery formula compared to other liquid lipsticks, and it’s scentless unless you really sniff the applicator, which will give you a faint whiff of root beer (the scent of Milani’s liquid mattes as well, oddly).

When first applied, Trap has an extremely smooth, super-matte finish. As I’ve mentioned ad nauseam on this blog, I have very dry lips with prominent lip lines, but a fresh application of Trap all but erases those flaws: 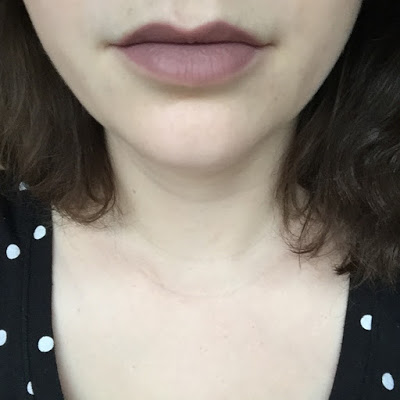 Four hours, a coffee, and a roll later, the dry bits of my lips are definitely apparent, but the color hasn’t worn off at all (as you can see, it looks warmer and pinker in artificial light):

But how does Trap feel, you ask? For the first few hours, it really feels like nothing. (This is in stark contrast to Milani’s formula, which becomes painful within an hour.) Though the lipstick is dry to the touch, it feels very slightly tacky if I press my lips together. After four hours, the sensation of dryness really sets in, but it’s not unbearable: I’d compare it to the effect of my NARS Velvet Matte Lip Pencil. The absolute longest time I can wear Trap is five hours; after that, I feel a strong desire to wipe it off and smother my lips in balm. Cocoa-butter balm is also what I use to remove Trap, though any oil would work as well, as would plain old petroleum jelly. Just smooth it over the lipstick and wipe off with a tissue, no hard scrubbing required. The day after I wear Trap, I find that my lips are craving a gentler formula; I don’t think I could wear it two days in a row.

As for longevity, Trap withstood the aforementioned coffee and roll with no problem; full meals posed more of a challenge, as the color came off the inner part of my lower lip. Most liquid matte lipsticks flake off instead of fading, and Trap is no exception. You might be able to avoid this fate if you eat your meals very daintily and avoid oily foods, but I prefer to remove Trap before eating and reapply later (my policy with all lipsticks, actually). Touch-ups aren’t much of a hassle, though: just fill in the worn-off patches with more product, and it looks fine.

Eye Candy is a very sparkly pinkish lavender (review coming soon); I applied it to the inner third of each mobile lid and blended it into Lhasa in the middle. And, dude, I am loving this Revlon Super Length mascara. It’s the first mascara that’s evoked anything more than indifference in me. 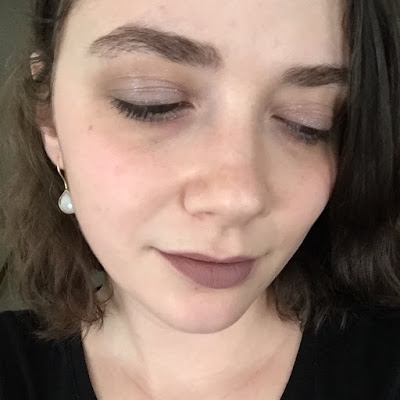 For my second face, I used Urban Decay Cover (a pinkish beige) all over my lids, with theBalm Serious on the lashlines. Blush was another new CP purchase, the bright purple Rain. 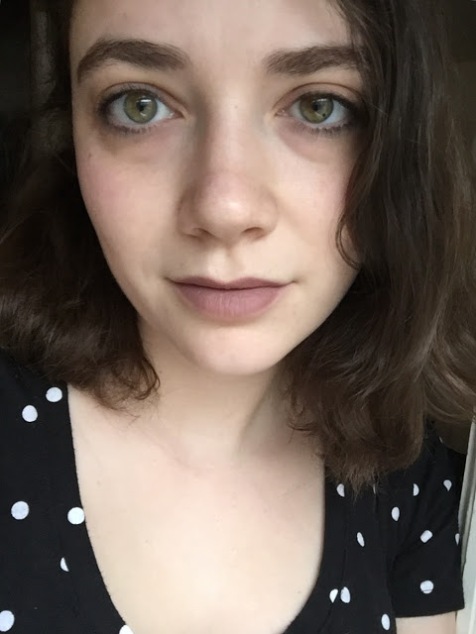 I don’t plan to buy any more of the Ultra Matte Lips: I wanted Trap mainly for the unusual color and the novelty factor, but the other colors in the line seem pretty dupable, and I can’t imagine the super-matte trend will last much longer. (ColourPop itself is currently firing up the hype machine with a new line of satin-finish liquid lipsticks.) Still, I’m very impressed with Trap’s performance! I don’t know how much my (or anyone’s) recommendation really means, given the wild diversity of opinion on the Ultra Matte formula, but at least I’ve added one voice to the online cacophony.

Have you tried any of ColourPop’s Ultra Matte Lip shades?