As I’m sure you’ve heard by now, Bite Beauty has almost finished releasing a series of twelve Amuse Bouche lipsticks inspired by the signs of the zodiac. Bite started with Aquarius in January, and they’re now two signs from the end, having just revealed Scorpio on Thursday. (If you’re curious about Sagittarius and Capricorn, Trendmood has leaked all twelve shades here.)

Like any other enamel-pin-collecting queer millennial, I enjoy astrology. I don’t believe in it, per se, but I’m a Scorpio with Pisces rising and Aries moon, and that combination of signs is unnervingly accurate for my personality. (I didn’t identify with Aries until I caught myself saying to my boyfriend, “I don’t have anger issues; I’m just angry all the time.”) So I’ve been following Bite’s releases all year, first with eager anticipation, then with increasing bafflement, and now with outright annoyance. The Astrology by Bite series was a great idea that could have been executed in a million appealing ways, but Bite simply blew it. The lipsticks themselves seem up to Bite’s usual high standards, but almost every shade is an absolutely bizarre choice for its zodiac sign. I didn’t feel the need to complain on my blog, though, until I saw the Scorpio shade.

Now, look: everyone knows that Scorpios are the goths of the zodiac. Halloween and the Day of the Dead (i.e. my birthday) fall during Scorpio season. Scorpios are INTENSE and MYSTERIOUS and VENGEFUL and occasionally PETTY. In fact, we’re vengeful and petty enough to write an entire snarky blog post if Bite releases a Scorpio lipstick that isn’t even close to the vampy splendor we deserve:

EXCUSE ME? A bright orange-red? A bright orange-red that looks identical not only to a bunch of other orange-reds Bite has released previously, but also to the Aries shade from March? Would you even be able to tell these two apart without the astrological signs on the tubes?

They look only slightly more different in these swatches from Bite’s Instagram story:

Bite’s explanation for this choice is that Scorpio is the most ~*~sExUaL~*~ sign of the zodiac: “For sexy Scorpio, Bite mixes up a bombshell shade. This searing, spicy red is perfect for hot dates.” Hot fire-sign dates, maybe, but Scorpio is a water sign, and its particular brand of sexuality isn’t the retro pinup look-at-me brand. Like, come ON. Everyone was expecting a dark purple or plum, or a burgundy, or even a metallic black reminiscent of the studded leather outfits we Scorpios wear while tying up our lovers in sex dungeons. A bright orange makes no sense for Scorpio. And I’m not the only one who thinks so:

But Scorpio isn’t the only sign to have gotten totally shafted this year, so let’s go through the Astrology by Bite series sign by sign and analyze where the problems lie. (I wasn’t able to find Bite’s blurb for every shade, but I’ve copied and pasted the ones I could find. All photos are Bite promo images from Temptalia.)

Bite started the year strong with this bright purple, a good match for eccentric Aquarius. I don’t have any complaints about the shade itself, but I am annoyed that Bite kicked off its series with the first zodiac sign in the Gregorian calendar year. The zodiac actually corresponds to the Julian calendar, in which Aries is the first sign.

“Ruled by the planet Neptune, Pisces is the water sign of artists and dreamy creative types; it’s considered the most spiritual and compassionate sign of the zodiac. Pisces are soulful, and like water they ‘go with the flow,’ blending in and out of different environments.” 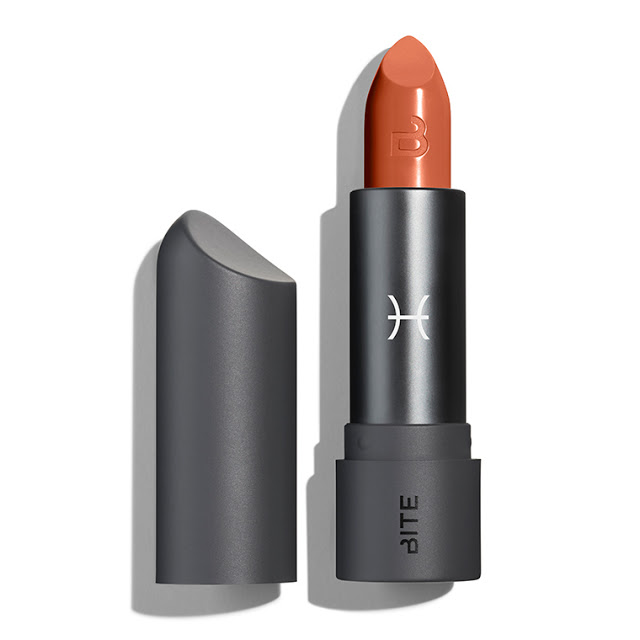 Just two lipsticks in, things start to get weird. Pisces is a water sign. Its symbol is literally two fish. For this most aquatic of signs, Bite chose…a brownish peach. I think a soft shade of blue would have been perfect for sensitive Pisces, but Bite clearly decided to stick with traditional lipstick colors for this collection, despite having created blue lipsticks in the past. Bummer. 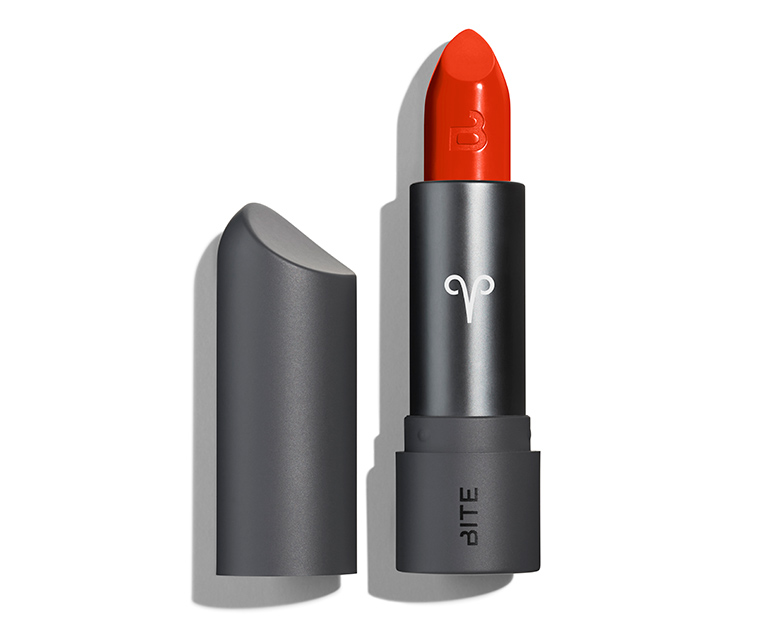 Back to the expected with this bright warm red, which is exactly the color I would have chosen for impetuous, hot-tempered Aries, though I might have made it metallic for even more punch.

“Taurus is an earth sign, ruled by the planet of love, Venus. Sleepy, sensual Taurus is enamored with everyday luxuries: Flowers, chocolate, and all the finer things in life are essential to beauty-loving bulls.”

When I think of Taurus, I think of rich food and dark wine. This is a beautiful MLBB, but it’s more subdued and professional than I’d expect a Taurus lipstick to be. For this sign, I would have liked to see a rich chocolate brown (similar to Smoked Za’atar) or a merlot red, though I understand that Bite was trying to make a spring-appropriate shade.

Also, it’s “enamored of,” not “enamored with.” Just sayin’. My mistake: both are correct!

“For Gemini, the sign of the twins, Bite offers a double-sided bullet. A warm nude and a fun-loving red let Geminis mix up their style as they please.”

Here is where the Astrology by Bite series jumps the shark. How would a human being wear this lipstick? I appreciate the spirit of the thing, but if you’re going to make a two-toned lipstick, maybe pick two colors that actually go together. (Kate mixed the two shades to create a soft salmon pink, but I can’t imagine many people going to that trouble.) Or if you want the red/nude split, make a dual-sided lipstick like the ones Bite itself has released in the past. Or just give us a freaking duochrome along the lines of the Prismatic Pearl Multisticks. Bite could have conveyed the Gemini ethos in so many interesting ways, but they went with the least wearable one. If you want nightmares, check out the two-toned lip that Bite itself created.

“For nurturing, caring Cancer, Bite mixes up a safe-but-sexy neutral. Cancers will love this muted mauve with gray undertone that looks just as good at home as it does at work.” 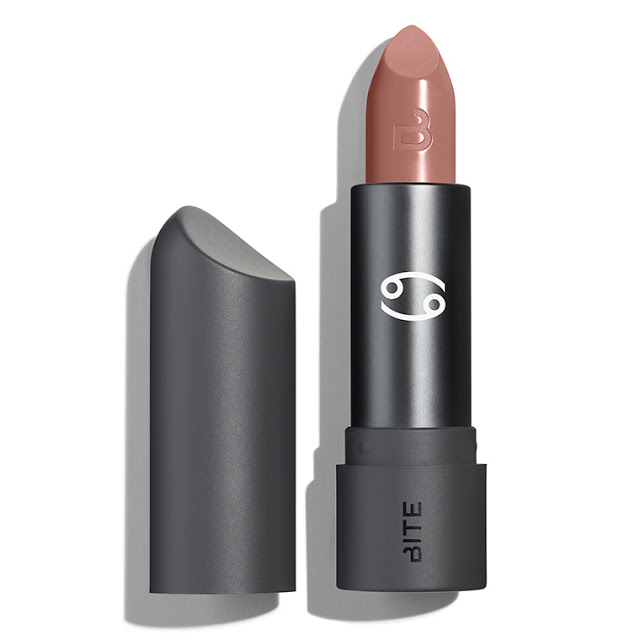 Cancer and Taurus aren’t quite as similar as Aries and Scorpio, but they sure are close. Also, Bite missed the perfect chance to set an oceanic mood by describing the lipstick as a “sandy beige” (though as swatches reveal, Cancer is much pinker than the promo photo indicates).

“Leo offers incredible vibrancy and bold dimension. Leo is a fire sign, ruled by the sun. Like the sun, bold Leo lions like to be the center of attention: They’re dramatic and charismatic, always the star of the show.“

Here’s where my inner conspiracy theorist emerges. Leo looks very similar to the sheer gold lipstick that Bite released for the holidays a couple of years ago. Is it possible that some of the zodiac lipsticks are repackaged older shades with astrological signs slapped on? I won’t deny that this lipstick is appropriate for Leo, but surely the stereotypical Leo would want an opaque gold, not a sheer one.

“Virgo is an earth sign, ruled by the planet of communication, Mercury. Disciplined Virgos demand perfection and order all around them; they’re known to be humble and practical, and love a good value…For earthy Virgo, Bite mixes up a shade inspired by the fruit of the vine. This grapey-red is a smart hue that goes with everything.”

This is by far my favorite shade in the series (surprise), and it’s not a terrible choice for Virgo, though I would have expected something a little less dramatic.

“For stylish Libras, Bite mixes up a shade made for hitting the social circuit. This balanced medium brown gets along with just about anybody.”

In my opinion, it’s impossible to make a brown lipstick that “gets along with just about anybody.” There is nothing less flattering than a brown lipstick that clashes with your undertones, as I discovered when I tried on Bite’s own yellow-toned Edgy Neutrals collection last year. And Libra is a warm brown that most certainly won’t get along with cool-toned folks. That said, I’m not sure what color I would have assigned to Libra. It’s an artistic, creative sign, so maybe a neutral with a twist, like a grayish lavender?

Sagittarius and Capricorn are a bright pink and dark plum, respectively. Many of the Sagittarians I’ve known well have been narcissists with no sense of personal or professional responsibility, and neon pink is indeed a color that shouts “look at me, but don’t expect anything of me.” (No offense to any Sagittarians reading this, of course. I’m sure you’re lovely people.) Bite’s choice for Capricorn is more mystifying. Capricorn is a businesslike earth sign, so I would have assigned it an office-appropriate color, a soft neutral like Taurus or Cancer. Why not give the vampy shade to Scorpio? (Look, we hold grudges. We’re not going to get over this.)

Taken as a whole, the Astrology by Bite lineup seems unbalanced and incomplete: lots of warm oranges and browns, two pairs of near-dupes, only one dark shade, and no truly offbeat colors (unless you count Leo’s gold). This series had so much potential, but it’s started to feel like a cynical cash grab: “Well, the kids like astrology, so let’s re-release some old colors and put astrological symbols on the tubes; they’ll eat that shit up.” The first four lipsticks sold out almost immediately, but all five shades from Gemini to Libra are still available on Bite’s website, suggesting that I’m not the only one to have soured on Astrology by Bite. I think Bite is at its best when pursuing its foodie roots (e.g. Edgy Neutrals, Spice It Up) instead of hopping on the latest trend, and I hope Astrology by Bite isn’t an indicator of things to come for the brand.

25 thoughts on “Astrology by Bite: A Rant”