Last summer, I got rid of my Illamasqua cream blush in Zygomatic, one of my all-time favorite beauty products, which I’d bought in the UK in June of 2014. I hadn’t noticed a change in its appearance, smell, or performance, but I felt increasingly uncomfortable smearing a six-year-old cream blush on my face. Unfortunately, Illamasqua is no longer available in the United States and I don’t exactly have international travel plans, so I started looking for a replacement. (Correction, 6/7/21: Illamasqua actually is available in the US and I ended up ordering a new Zygomatic. Lol.)

Zygomatic filled a very specific niche: it was my perfect nude blush, a slightly cool-toned beige that harmonized with my coloring and worked well with both warm and cool colors elsewhere on my face. Most beige blushes on the market lean either warm and peachy or noticeably pink. But I recently became aware of the cream blushes from the newish beauty brand Tower 28, and one of them, Magic Hour, looked very similar to Zygomatic. So when I was in Cleveland earlier this week, I popped into Sephora and was pleased to find Magic Hour in stock, and here it is!

I knew almost nothing about Tower 28 before buying Magic Hour—that’s what I get for not being on TikTok, I guess—so I had to do some research for this post. Founded in 2019 by Amy Liu, who previously worked in marketing at such beauty brands as Smashbox and Josie Maran, Tower 28 made it into Sephora this past January, just a year and a half after its debut. (You might assume that Liu is a Gen Z influencer type, but she’s forty-one and has a mere 1,727 Instagram followers! It’s refreshing to see a new beauty brand that doesn’t have a famous figurehead.) Tower 28 currently offers just a few products, all at a midrange price point: lip glosses in jelly and milky formulas, cream blushes, a cream bronzer and shimmer-free cream highlighter, and a setting spray.

I’d describe the brand’s aesthetic as “minimalist ’80s,” which sounds like a contradiction in terms but somehow works: slim, clear packaging, sheer but vivid color products, and California-vaporwave boxes. (Tower 28 is a lifeguard tower in Santa Monica, apparently.) That neon typeface with the squiggly W is graphic-design gold:

One reason why Tower 28 entered Sephora so soon is that Liu created the brand with sensitive skin in mind, so it fits nicely into the “Clean at Sephora” initiative, which pushes “clean beauty” products formulated without parabens, mineral oils, and other ingredients that have acquired a bad rap in recent years. Frankly, I find the whole “clean beauty” movement kind of silly: many of the allegations against the stigmatized products (for instance, that parabens cause cancer) haven’t been scientifically proven, and the American cultural obsession with “clean” products and foods seems to me to dovetail with growing anti-vaccine and other anti-scientific sentiments.

Also, the reason my Illamasqua Zygomatic lasted six and a half years without growing mold? Parabens. Since the paraben-free Magic Hour won’t last anywhere near as long, I feel a certain pressure to use as much of it as possible before its inevitable demise.

On to the review! 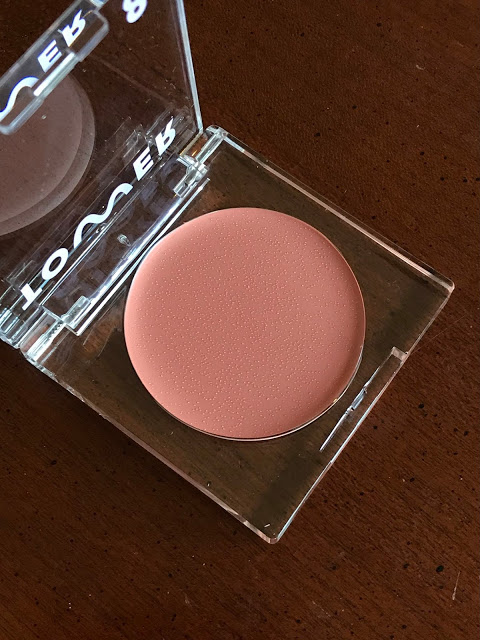 The BeachPlease blushes cost $20 for 4.5 grams; by contrast, the Fenty Cheeks Out cream blushes are $20 for 3 grams, so you’re getting a pretty good deal with Tower 28. The clear packaging is aesthetically pleasing, but it doesn’t feel particularly sturdy. I love bringing cream blushes with me when I travel (here’s hoping I get the vaccine before too long and can actually go somewhere this year), but I’d hesitate before tossing Magic Hour into a makeup bag with dozens of other products. This is also the kind of blush that’s a real bitch to open: you have to either jam your fingernail into the latch or wrench open the compact while holding the sides. Why do I have a hunch that the hinge will break within a year?

Tower 28 describes Magic Hour as a “sun-kissed rosy nude” (I thought were no longer using the word “nude” as a general descriptor for light beige makeup in 2021, but hey). Unfortunately, Magic Hour leans warmer and peachier in swatches and on my face than it does in the pan. Below, I’ve swatched Magic Hour with a few other blushes in the peachy-browny-pink family, and it looks almost orange next to the other three. It also has the heaviest and most pigmented formula by far: that’s one swipe of Magic Hour with two or three of all the others.

Magic Hour has an odd texture that I don’t think I’ve encountered in any other cream blush: it’s sort of sticky. When I tap lightly on the blush, my fingertip clings to the surface and comes away with a sizable dab of product stuck to it. Here’s a closeup of Magic Hour’s texture after I swirled my finger around; I believe the tiny bumps on the surface of the pan are harmless wax bloom. (Interestingly, Temptalia noticed the same thing on her own pan of Magic Hour.)

Because Magic Hour’s formula is on the thicker side, application isn’t as easy as the “tap tap + blend!” (tapotez + estompez!) method advocated on the label. As with my Fenty blush, I have to exert a certain amount of force to blend the color seamlessly into my cheeks, which are fairly dry. Fortunately, Magic Hour sets quickly on my skin and doesn’t feel at all tacky when I touch my cheek.

I have the hardest time getting the blush to show up in photos! Below, I’m wearing three layers of Magic Hour; the color is more evident in person, but still not clownish. It’s the sort of blush that’s almost impossible to over-apply. On my face, Magic Hour reads as a slightly warm-toned (not rosy, but not quite peachy) flush; I anticipate wearing it often in the spring and summer.

Magic Hour has decent longevity on my cheeks, though I find myself wanting to touch it up around the five-hour mark. Tower 28 claims that the BeachPlease blushes have “a natural luminous finish,” which I think would be accurate on skin less dry than mine. On me, Magic Hour is basically matte, though not in a bad way: it does indeed look natural. Below, I’m wearing about two layers of Magic Hour with Glossier Haloscope in Quartz, and you can tell by the finish where the highlight ends and the blush begins:

By the way, this product is advertised as a “luminous tinted balm” that works on both cheeks and lips. Tower 28 has a lot of nerve making that claim, because Magic Hour doesn’t even come close to being a functional lip product. It feels gooey, clumps up on every dry spot, and emphasizes lip lines, and the color is straight out of 2009 concealer-lips hell:

I have mixed feelings about Magic Hour. I do think it looks nice on me (on my cheeks, at least; let’s forget that lip swatch ever happened), and I’m sure I’ll get a lot of use out of it, but I’m sad that the color isn’t quite what I expected. And since I’m not a huge fan of the thick, tacky texture, I don’t plan to buy any more shades in this formula. Maybe I’ll just have to repurchase Zygomatic after all…