2015 will certainly go down in makeup history as the year of the brown lipstick. Dark gothy brown, ’90s-style midtone warm brown, muddy red, and the strangest brown of all: a cool-toned gray-brown, often with a hint of purple. I don’t know why undead lips have become so wildly popular this year, but they’ve been everywhere in the last few months. MAC Stone is the best-known example, but there are many others, mostly from Insta-friendly trendy brands. ColourPop alone has three gray-toned browns in its equally trendy liquid-matte formula: Trap, Kapow, and Beeper. But my distaste for liquid mattes is no secret, and the zombie lipstick that caught my eye last month was a conventional bullet: Topshop Boardroom, which I mentioned in my recent wishlist post. 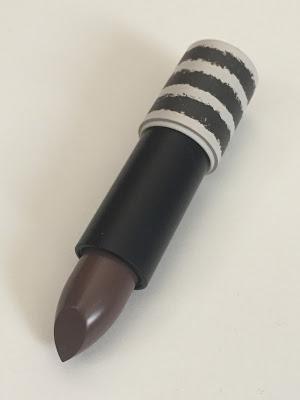 The elephant in the boardroom, so to speak, is that this shade of brown doesn’t flatter many people. So why does it appeal so strongly to me, and why did it catch on in the first place? I swear the current craze for post-apocalyptic fiction has something to do with this desire for a vaguely unhealthy lip look. There’s also the element of challenge: a mushroom-brown lipstick, like a vivid purple blush or a lime-green eyeshadow, is just daring you to make it work. These shades seem to hold particular attraction for makeup junkies who have already collected their most flattering colors—the berries, the peaches, the nudes—and have nowhere to go but zombietown.

So perhaps it’s fitting that I ordered Boardroom late at night under the influence of a fairly high fever after finishing a postdoc application. (I’ve been getting sick repeatedly in the last few weeks, due to stress, sleep deprivation, and a campus swarming with undergrads who somehow got into an Ivy League university without learning how to wash their hands.) It was my first time ordering from Topshop’s American website, and I appreciated the free shipping, which I wasn’t expecting for a $12 lipstick. Less pleasing was the condition in which the lipstick arrived:

The tube was bound to get scuffed eventually (there’s a reason that most lipsticks aren’t housed in white tubes, Topshop), but I would have liked to see it in pristine condition at least once. At least the tube wasn’t broken and the lipstick itself wasn’t damaged at all. I assume the scuffing happened before shipping, since the box was fine:

Boardroom is described as a matte lipstick, but all this means is that it’s not super-glossy; I’d call it a semi-matte. It has a strong fruity-flowery scent, like a synthetic strawberry crossed with a YSL-esque boozy rose. I find the scent quite pleasant, though, and it doesn’t linger after application.

Like Rio Rio, Boardroom has a soft, slippery, slightly translucent formula; I was surprised at how much lighter it looked on my lips than it did in the tube. Here’s one pass on my arm: 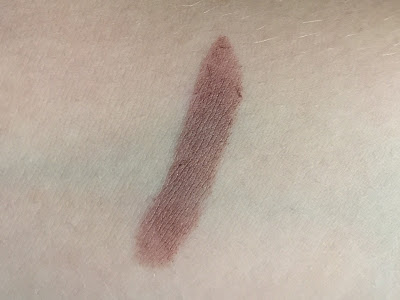 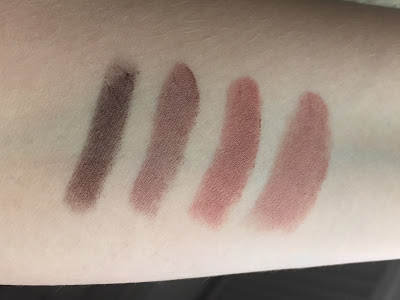 And two coats on my lips. As you can see, the gray and plum tones come forward much more strongly here. This particular lighting also makes my skin look quite gray; I swear I’m not actually a zombie though I mean if you ever feel inclined to send some brains my way just let me know and I’ll give you my address

Boardroom and Rio Rio share a light, comfortable, non-drying formula, but also a tendency to sink into lip lines after a couple of hours. Boardroom also doesn’t have much lasting power, and will come off on cups if you’re drinking. But it’s a lighter color, so I forgive it. Seriously, when did we all start expecting lipstick to wear like iron? Did that start with the liquid-matte trend, or did the liquid-matte trend originate in the desire for magical 24-hour wear? Is this yet another product of the modern apocalyptic imagination—a demand for disaster-proof lip color, just in case?

Now for the fun part: figuring out how to wear this tricky color. My first attempt was very simple: matte plum eyeshadow from theBalm smudged along my upper lashlines, plus a light dusting of NARS Mata Hari blush (all but invisible here, sorry):

After posting this photo on Instagram and sending it to my boyfriend and roommate, I was surprised at the number of people who told me it didn’t look all that weird. I don’t think I’d wear it to an interview (or in a boardroom, for that matter), but it seems to be just shy of a statement lipstick. It’s a neutral teetering on the brink of the uncanny valley. I dig it.

Here it is with slightly heavier eye and cheek makeup: ColourPop Bill and the plum from NARS Habanera on my eyes and Sleek Flushed on my cheeks. 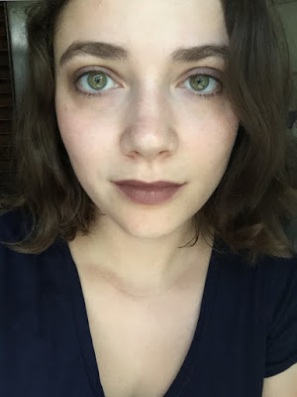 I succumbed to Urban Decay’s Rapture blush, a plum with soft gold shimmer, during their Columbus Day sale yesterday, and I can’t wait to see how it looks with Boardroom. I think Flushed is a bit too warm for this look.

What think you of the zombie-lips trend?