Now that beauty-throwback trends have slid forward in time from the Brown ’90s to the Iridescent ’90s, brands are releasing a flood of metallic lipsticks—or, at least, what they call “metallic lipsticks.” But there tends to be a huge amount of variation between one formula and another, and even between one shade and another. Some “metallic” shades have an even sheen; others have big chunks of glitter; others shift their color depending on the angle and light. Can all of these finishes really be described by the same adjective? I THINK NOT. So I present to you… 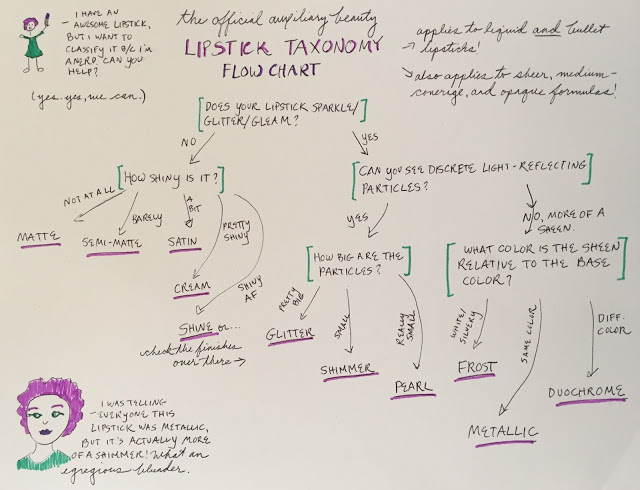 You might have to enlarge the image to see all of my neurotic little notes, but the main point I’m trying to make in this flow chart is that whether a lipstick can be classified as “metallic” depends on 1) the size of the shiny particles and 2) the color of the particles relative to the base color. I define a metallic lipstick as one with an even sheen (i.e. no visibly discrete particles) that is the same color as the base color. Here’s a close-up of the relevant section:

All of these categories are up for debate, of course, but this is more or less how I classify lipsticks in my head. Which brings me to the subject of today’s review: Metal Head and Pale Rose, two shades from MAC’s new Metallic range. I wish I had a macro lens or, you know, anything better than an iPhone camera, because my photos don’t remotely do justice to the sparkle. 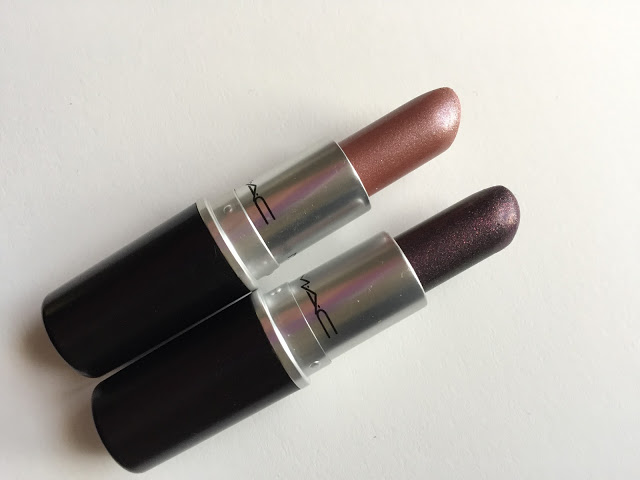 I was a little confused when I saw photos of these lipsticks pop up on Temptalia. I’d been expecting something like the NYX Wicked Lippies, but most of the MAC shades appeared to have a sheer base color and a contrasting color of shimmer or glitter particles, which made them indistinguishable from MAC’s venerable Frost formula. (My flow chart would put most MAC “frost” shades into the “shimmer” or “pearl” category, since I define “frost” pretty narrowly as a white or silvery sheen. Again, up for debate; there’s a case to be made that a silver/white pearl or a gold sheen could count as frost, or that I’m putting way too much thought into this.) It’s unclear to me why MAC didn’t simply expand the Frost range, as they did the Matte range two years ago. My best guess is that “frost” is still a dirty word, evoking silvery bubblegum horrors from the ’80s, and MAC thought they might as well cut their losses and create an entirely new category. Hey, it worked on me: I spent an embarrassing amount of time one morning admiring Temptalia’s sneak peek of all 18 shades. If you’re in need of some extra beauty today (and who isn’t, these days), do yourself a favor and scroll slowly down that page. Here are some far less pretty swatches of my own, taken under Nordstrom lighting that’s pulling all the shades a bit warm:

And the full display:

The first shade to catch my eye was Metal Head, a sheer purply black with fuchsia sparkle. Some of you will remember my ultimately futile search for a sheer black lipstick last year (posts here and here). After destashing my deluxe sample of Givenchy Noir Révélateur earlier this year, I gave up the quest, concluding that it might not be possible to find a lipstick that delivered the look I wanted. But when I saw Metal Head, my lust revived. Honestly, I didn’t even care how it wore; I just wanted to own and ogle that tube of cyberpunk perfection. So I bought it.

A few weeks later I tried on Pale Rose, which seems to be the blogger favorite, and bought that too.

Even before swatching these lipsticks, I had a feeling that the flow chart would place them in a category other than “metallic.” Below, I’ve swatched them next to two other shiny lipsticks: Urban Decay Roach and Milani The Ultimatte. Both of those shades have an even sheen that’s roughly the same color as the base color, which qualifies them for the “metallic” category. The MAC lipsticks, though…well, take a look: 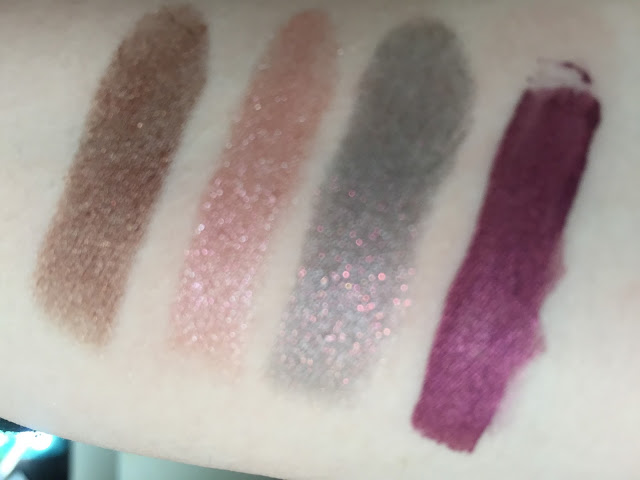 But the chart has one big weakness: it assesses how lipsticks look in the tube, not on the lips. And unless I’m in direct artificial light, the two colors in Metal Head blend into a metallic-looking grayish purple. Someone commented on my Instagram that the shade looks very similar to Kling It On from MAC’s Star Trek collection last year, and after looking up swatches, I suspect that Metal Head may be a repackaged Kling It On. So if you missed out on that one, here’s another chance!

I worried that Metal Head might apply or wear off unevenly, but I’m impressed by the formula. It’s definitely sheer (the swatch above is two or three layers), and if you look closely, you can see that it bunches up a little in my lip lines. From a normal distance, though, I think it looks pretty good! It applies smoothly without being too slippery (though it does need touching up after two hours or so), and it feels comfortable and slightly moisturizing.

When I posted about Metal Head on Instagram, I got some questions about whether it would work as a topper for another lipstick. So I layered it over MAC matte lipstick in Men Love Mystery, a bright warm purple. Here’s Men Love Mystery on its own (top) and under Metal Head (bottom):

Metal Head made both lipsticks darker and cooler-toned, but the sparkle didn’t really translate in either case, which was disappointing. Still, much better for a “smoky lip” than Black Lace Rabbit.

Some reviewers have praised Pale Rose for being more opaque than MAC’s darker metallic shades like Metal Head. What they haven’t made clear, though, is that it’s not the base color that provides that opacity; it’s the thickly packed glitter. Metal Head looks metallic under certain lights, but Pale Rose always looks as sparkly as Lana Del Rey’s décolletage in the “Music To Dangle Prepositions To Watch Boys To” video:

If Metal Head is cyberpunk, Pale Rose evokes trashy ’60s and ’70s futurism, like Lana Del Rey in a lamé catsuit and fake antennae. I don’t know why I’m so attracted to that aesthetic this spring, but I really am (not that my attraction translates into any meaningful difference in my fashion or makeup). Pale Rose is a sheer pinkish brown with abundant gold sparkles and a glint of pink here and there. I’ve swatched it between two other nudeish lipsticks, Bourjois Beige Trench (left) and Milani Matte Naked (right). Beige Trench looks shimmery here, but that’s just the sunlight.

Pale Rose on my lips:

When I say “abundant gold sparkles,” that’s exactly what I mean. Pale Rose feels gritty when I’m applying it (though not when it’s sitting on my lips). And I wasn’t aware until I tried Pale Rose that a lipstick could have glitter fallout. Here’s the tissue with which I removed it last time I wore it:

All this sounds like complaining, but I’m actually pleased with Pale Rose. It’s not an everyday shade, but I like it as a retro-futuristic variation on an ordinary MLBB. Here I am wearing Pale Rose with a Modern Renaissance “smoky eye” that got almost entirely lost in my eyelid crease. I’m wearing Warm Sienna in the crease, Antique Bronze all over the lid, Cyprus Umber in the outer corner, and (I think) Primavera in the inner corner:

It was smoky, though, I promise. I need to start blending my crease color way higher, I guess. But how much higher can I possibly take it before it runs into my eyebrow? 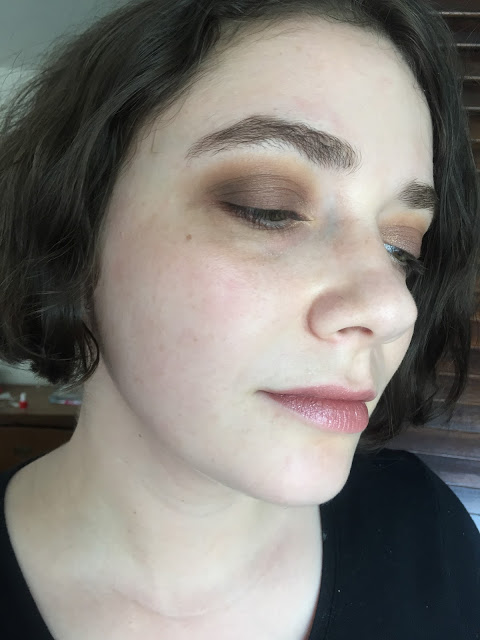 Overall, I really enjoy Metal Head and Pale Rose. I’d recommend the MAC metallics to anyone who enjoys offbeat lip colors, with the caveat that most of the shades are not true metallics but sheer lipsticks packed with shimmer of a different color. If that appeals to you, then knock yourself out. Have you come around to the Iridescent ’90s yet?

25 thoughts on “MAC Metallic Lipsticks in Metal Head and Pale Rose, and a Lipstick Taxonomy”